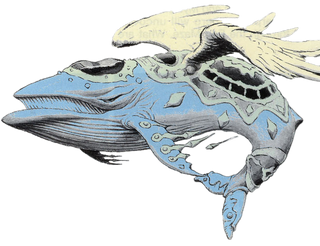 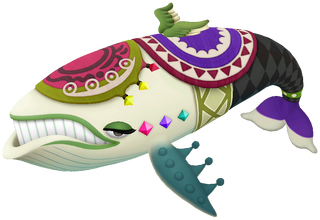 The Wind Fish is a character in Link's Awakening.[3] He is a large, flying whale, able to control the wind,[4] who makes his home atop Mt. Tamaranch on Koholint Island, inside of the Wind Fish's Egg. He serves as the main focus of the storyline.

He can only be woken with the Instruments of the Sirens.[5] Should the Wind Fish wake, Koholint Island and all its inhabitants will vanish; however, Link only learns the true nature of the Wind Fish after the final Nightmare has been defeated.[citation needed]

The Wind Fish is the deity who created Koholint Island, a manifestation of land and life seen in his dreams created through the dreamer's sleep.[6] As Koholint Island is just a figment in his dream, its inhabitants are dumbstruck at the idea of land outside of the island's shores, except for Marin.[citation needed] Though how he ended up in the dream is unknown, Link sets out on a mission to awaken the Wind Fish to return to his own world.[7]

Before the events of Link's Awakening, Link is caught in a storm, created by the Wind Fish while he was sleeping.[8] Throughout his adventure, many hints and references about the Wind Fish are told to Link through Koholint Island's native inhabitants. For instance, Marin's song is titled "Ballad of the Wind Fish."[9] The story of the Wind Fish is conveyed most often by a sentient Owl that appears and reveals information about the dreamer and Koholint Island. Ultimately, the truth of Koholint Island's eventual doom is revealed by an inscription in the Southern Face Shrine,[10] however, the Owl says that none know for sure whether it is true.[11] The Nightmares, who serve as Bosses guarding the eight Instruments of the Sirens, know the truth about Koholint Island, and some try to tell Link about it upon their defeat.[12][13] However, they also seem to think that Link himself is part of the dream.[14][15] The Owl himself is revealed to be part of the dream, as he is part of the Wind Fish's soul and guardian of his dreams and the worlds within them.[16]

Early on, Link encounters the Wind Fish's Egg sitting on top of Mt. Tamaranch in the Tal Tal Heights region on the northern section of Koholint Island. Link is to gather the eight Instruments of the Sirens found in each of the Dungeons and play the "Ballad of the Wind Fish" in front of the Wind Fish's Egg, which also serves as the final Dungeon, with the Shadow Nightmares featured as the entity keeping the Wind Fish in its eternal slumber.[17]

Upon defeating DethI, the final Shadow Nightmare, Link is sent upward into the sky via a staircase created by the Wind Fish. The dreamer, who has now awakened, reveals himself to be a giant whale lavishly endorned with cloth, metals, and precious stones. He explains the peril of Koholint Island, but ultimately tells Link that all dreams must end.[6] With this statement, Koholint Island begins to disappear and Link is seen floating on a piece of his wrecked ship in the middle of the sea. While contemplating if it was only a dream, he looks up to see the Wind Fish flying off into the distance with a flock of seagulls.

In Hyrule Warriors, the Wind Fish appears as part of Marin's attack moves with her Bell.

In Super Smash Bros. Ultimate, the Wind Fish appears as a Spirit with the ability, Special-Move Power Up, which raises the attack power of special moves.