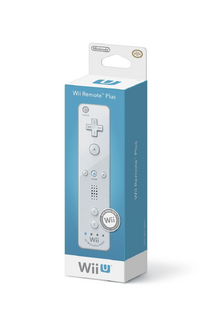 A Wii Remote Plus released for the Wii U.

Wii
Wii U
Nunchuk
Wii Remotes are controllers used on the Wii and Wii U.

Wii Remotes are used for playing most games made for the Wii or Wii U. They can be paired with a Nunchuk to add use of a joystick and two additional Buttons.

An add-on for the Wii Remote called the Wii MotionPlus was released in June of 2009.[1] It added a gyroscope and supplemented the accelerometer, allowing the Wii Remote to sense movement much more precisely.

The Wii Remote Plus was later released. It built the Wii MotionPlus into the remote, allowing it to fit into other accessories such as the Wii Zapper.

A golden Wii Remote Plus with a Royal Crest design was released alongside Skyward Sword as part of a limited edition bundle.[2]