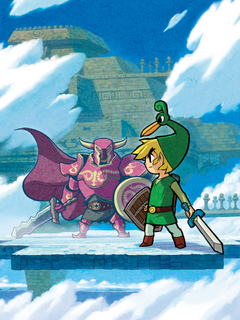 The Legend of Zelda
The Minish Cap

The Legend of Zelda
2

The White Sword is the second sword available to Link in The Legend of Zelda, following the Sword and preceding the Magical Sword. It can be obtained once Link has five Hearts in his Life Gauge. The White Sword does twice as much damage as the original Sword.[2] Link is given the White Sword by the White Sword-Giving Old Man in a cave in the northeast of Hyrule near a waterfall, which is guarded by a Lynel.

The White Sword also appears on the back of the 8-Bit Link amiibo.

Each time Link infuses the White Sword with an Element, the hilt of the Sword changes color, and Link is able to make more copies of himself when he charges a Spin Attack over special tiles, with the maximum copies being three. The Four Sword allows him to make four copies of himself.

White Swords have a base attack of 150 which increases by ten percent for each star in the Weapon's star rating.[3] This means that, depending on the White Sword's star rating, the Weapon can have an attack range of 150, 165, 180, 195, 210, and 225. White Swords have three slots for Skills (which can be increased by using a Weapon with a "Slots Up" Skill.) They are Light-type Weapons, meaning that the Weapon will increasingly deal more damage while repeatedly attacking a group of Enemies.[4]

White Swords are directly based off the White Sword from The Legend of Zelda, almost directly matching the artwork from that game.

An 8-bit version of the White Sword, called the 8-bit White Sword?, also appears as the Lv.★ form of Zelda's Rapier. It was added to the game with the Master Quest Pack DLC, and is unlocked by default in Hyrule Warriors: Definitive Edition.