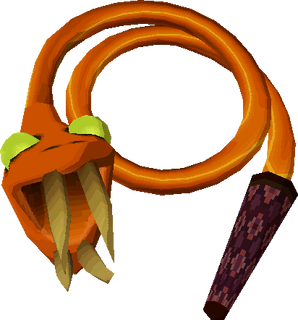 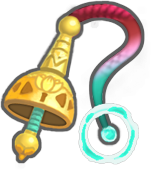 The Whip can be found in the Ocean Temple in Spirit Tracks. Its main use is to swing from poles and for puzzles that require the transfer of certain Swords from one place to another. It can also be used to remove thorns from Trees that block Link's path as well as being able to hold on to flying propellers to travel to otherwise unreachable areas. When summoning Birds by playing the "Song of Birds", Link can use the Whip to latch on to the wooden bars they hold, which allows him to be carried by them.

The Whip can attack certain Chuchus that Link cannot attack with his Sword. It can also take the Shield and armor away from certain enemies. The Whip is required during the fight against Phytops, the Boss of the Ocean Temple, where it is used to pick up and throw thorns to damage the creature's weak point.

The Whip can also be used in the Whip Race minigame in Whittleton.

The Whip can be found in the Ancient Cistern in Skyward Sword. A ball of light is found at the end of the Whip, which can attach to many things. It is also possible to hang on poles and certain branches with the Whip and swing in the air with it. It can also be used to attach to the hooked thorns of a Lily Pad to flip it over, to pull out-of-reach levers, and to uproot Peahats to later be used with the Clawshots. Rupees and Hearts can be grabbed with the Whip and pulled to Link. As a weapon, it can be used to defeat weaker enemies, stun larger ones, and to dismantle the Ancient Cistern's Boss, Koloktos. The Whip can be used to steal Monster Horns from Red Bokoblins. To use the Whip, the Wii Remote must be flicked.

The Whip appears as an Assist Badge in Hyrule Warriors. Whip Badges resemble the Whip from Skyward Sword and increase the duration of the Hookshot power-up.

Badges in The Legend of Zelda series
Community content is available under GNU Free Documentation License unless otherwise noted.
Advertisement