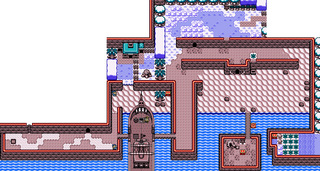 The Western Coast during Winter

Hero's Cave
Cemetery
Eastern Coast
The Western Coast constitutes the south-western border of Holodrum in Oracle of Seasons.[1] Located directly west of Horon Village, it is one of the first explorable areas in the game. As such, it features only weaker enemies. In this area is a small pseudo-dungeon known as Hero's Cave, one of the first trials Link must face.

The northern section of the area is composed of an elevated rock formation divided into two plateaus; the uppermost is lush with vegetation while the other is bare and rocky. Entering the area from Horon Village brings Link to the uppermost plateau. He can reach the base by jumping straight off the edges or by taking the path down the side of the hill. On the lower plateau there is a cave containing a Fairy Fountain. This rocky part of the Western Coast is inhabited by Octoroks. The southern section of the area consists of a sandy beach stretching from the bottom of the hill to the ocean that borders southern Holodrum. The beach of Western Coast is inhabited by Sand Crabs. The Golden Darknut also appears here in spring.

The Hero's Cave is located on the beach at the very base of the hill. Here Link finds his first Sword,[2] which is needed to speak to the Maku Tree.[3] The cave can also be entered through a well next to the cave entrance by jumping down from the cliff above. This allows Link to get to an otherwise unreachable Treasure Chest containing 30 Rupees.[4] In a Linked Game, the Hero's Cave becomes a full dungeon where the L-3 Power Ring is the reward.

Later in the game, Link returns to the Western Coast to search for one of the Jewels required to access Tarm Ruins. The X-Shaped Jewel is located on a nearby island just off the coast. To reach it, Link must light an offshore torch using the Slingshot and Ember Seeds. This activates a bridge connecting the island to the shore.[5] Using Mystery Seeds on the rock formation in the shape of a question mark on the island makes a Mini-Moldorm appear. The Treasure Chest containing the Jewel materializes after its defeat.[5]

After helping the stranded Piratians get their ship back on the seas, the Cap'n lands the ship in the bay between the Western Coast and the Graveyard, connecting the two locations. This enables Link to access the western end of the coast, which features the area's only tree stump and an uninhabited house. In a Linked Game, a friendly lone Ghini appears inside the house. Link obtains the Library Secret from the Ghini, who reveals himself to be a former member of the Eyeglass Island Library in Labrynna.[6]