Zelda Wiki
Register
Don't have an account?
Sign In
Advertisement
in: Objects, Objects in A Link to the Past, Objects in Link's Awakening,
and 3 more 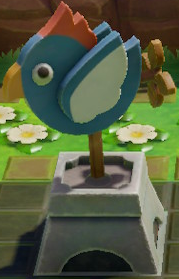 Link's Awakening
Opening a passage to the Flying Rooster
A Link Between Worlds
Saving
Warping
Weather Vanes,(ALBW)[1] also known as Weathercocks,(ALttP | LA)[2][3] are recurring Objects in The Legend of Zelda series.

The Weathercock appears in the center of Kakariko Village in A Link to the Past. If Link plays the Flute while standing near it, the Weathercock will shatter and a Bird will emerge from inside the statue. In the Dark World, the Weathercock is replaced by a Gargoyle Statue.

A single Weathercock appears in Mabe Village in Link's Awakening. When Link learns the "Frog's Song of Soul" from Mamu, he must play the song in a hidden room under the Weathercock to revive the Flying Rooster.

In Link's Awakening DX, the Photographer will also take a photo of Link, Marin, and Tarin in front of the Weathercock.

In A Link Between Worlds, Weather Vanes serve as Saving and Warping points and are located at landmarks around Hyrule and Lorule. Weather Vanes are found outside each Dungeon and at other major points of interest and revisits, such as Ravio's Shop and Kakariko Village. After Link meets Irene, she will offer to transport him to the location of any previously activated Weather Vane, should Link ring the Bell.

If a certain amount of time has gone by without saving, then the Weather Vanes will react by fluttering their wings and making a small sound akin to chirping whenever Link is in the vicinity.[clarification needed] They will settle down once the game has been saved. They will also remind the player to avoid eyestrain by suggesting to take a break.

In Hyrule Warriors, Weather Vanes resembling the ones in A Link Between Worlds appear as icons whenever the Warriors have reached a checkpoint, allowing them to resume from that moment onward should they lose to the opposing Forces.