This article is about the location in Skyward Sword. For other uses, see Waterfall (Disambiguation). 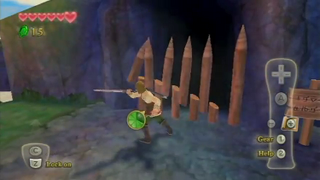 The entrance to Waterfall

Skyloft
The Waterfall Cave,[1] [2] lso known as the Waterfall,[3] is a location in Skyward Sword. Link's Crimson Loftwing is hidden here by Groose and his lackeys at the beginning of the game. It is also the home of the Moonlight Merchant.

The Waterfall is a large waterfall on the island of Skyloft. It is infested by a number of monsters and cannot be entered without a Sword,[4] due to the fact that the entrance is blocked by wooden stakes. It is first visited when Link is looking for his Crimson Loftwing, which had recently gone missing. After speaking to a majority of the inhabitants of Skyloft, Pipit informs Link about the whereabouts of his missing Loftwing, suggesting that Groose may be behind its disappearance. He then presses on to tell Link that Fledge was forced to keep it a secret from him.[5][6] Groose and his gang had captured and hidden Link's Crimson Loftwing near their hideout which is located beside the Waterfall.[7] Link proceeds to enter the Waterfall's cave and senses the cries of his Loftwing nearby. However, the entrance is blocked by wooden stakes that can only be cut down with a Sword. After obtaining a Practice Sword from Eagus at the Sparring Hall, Link ventures inside. After exiting the cave, Link meets up with Zelda and finds his Loftwing trapped behind a number of large wooden planks. After cutting down the planks, his Crimson Loftwing is freed, and he may participate in the Wing Ceremony.

After obtaining the Goddess's Harp from Zelda at the Temple of Time, Link can return to the Waterfall and strum his harp near a patch of Blessed Butterflies to awaken an odd Gossip Stone known as the Moonlight Merchant. The Moonlight Merchant will sell Link rare Treasures for large sums of Rupees.