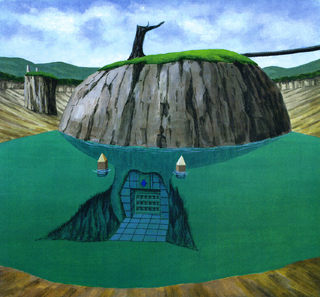 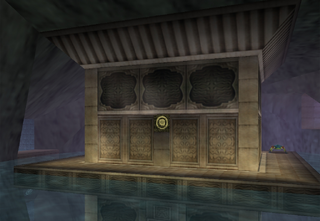 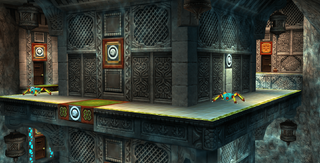 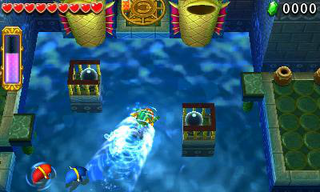 Water Temple is a recurring Dungeon in The Legend of Zelda series.

The ancient temple lies deep under the vast Lake Hylia. Guarded by the Zoras, it is considered a sacred temple that is used to worship the water spirits.[1] The Water Temple is accessible after the young hero finds the Iron Boots in Ice Cavern. Aided with the boots and the Hookshot, Link can access its entrance by shooting the target above the gate.

The Water Temple contains the source of the curse that has frozen Zora's Domain.[2] Various parts of the temple require Link to go underwater for substantial amounts of time, thus necessitating the Zora Tunic (though the Water Temple can be beaten without it by an experienced and resourceful player). Its enigmatic structure consists of various floors (four in total, one of them is a basement) and requires the use of playing Zelda's Lullaby at each of the special markings on the walls that manipulate the level of water, which give Link access to various parts of the temple from the hub room. Link will need to use all of his intellectual skills and cunning survival techniques to truly conquer this temple, as puzzles and obstacles are strategically varied: From the aforementioned water level manipulation, to swimming in presence of current flows, defeating enemy groups, climbing a waterfall with descending platforms, raise and lower pillars with a switch, etc.; the young hero will also come to confront his very own doppelgänger, Dark Link in the Water Temple. After defeating Dark Link, Link will find the Longshot which, once acquired, helps Link in the search for the Boss Key and enter the lair of the aquatic boss, Morpha.

This temple is infamous to Ocarina of Time fans for its difficulty and necessity for constantly pausing the game in order to switch to the Iron Boots and back. When the game was remade for the 3DS, the temple was altered in order to be completed easily. The Iron Boots are now a click-on item, glowing markings appear on the wall to show the way, and the entire temple was made brighter.

The Water Temple makes much use of Din's Fire in the Master Quest version of the game. The Hookshot is also used more often than in the original version. The infamous "serpent-shaped" room now has Hookshot targets over the wall, making it easy to simply bunny-hop through the vortex-filled gauntlet. The map, compass, and even the Longshot are obtained very early in the dungeon. The Longshot gives access to a lot of new areas and makes most puzzles easier than before. Most rooms are blocked with gates, so puzzles must be solved to be able to access them. Boulders and most enemies are no longer found, except for two Spikes and nine completely new Stalfos. Two new features include a room with several Dodongos, plus several crates that are found throughout the dungeon.

In the GameCube version of the Master Quest, Link can complete the dungeon with an extra Small Key remaining. This is because one of the doors that Link is meant to unlock with a key unlocks itself, specifically when defeating the Stalfos prior to Dark Link and causing the dragon heads to rise. The only way to reach this door and unlock it normally is by using glitches. In Ocarina of Time 3D this glitch was fixed.

Eiji Aonuma apologized for the design of the Water Temple in a 2009 interview.[3] Due to the confusing layout and controls for the Nintendo 64 version of Ocarina of Time, several changes were in Ocarina of Time 3D. The Iron Boots were changed into an item rather than a piece of equipment, the dungeon received glowing markings on various walls and corridors to mark where the player must go and to make changing the water level more clear,[4][5] and an additional camera scene was added in the central tower of the dungeon to make the location of a commonly and easily missed Small Key more obvious.

The Water Temple is a large, flooded palace filled with many pools. It is the fourth and last Level in the Riverside area. As it involves a lot of swimming, the Zora Costume becomes very useful here.

In Stage 1, the Links enter the temple from its entrance, where further down is a large pool. The Links can find two Gripshots here. A Water Rod can be found on top of a tall platform in the middle of the pool, but cannot be reached at that point. On the other side of the pool are two Switches, which are guarded off by cages on particular sides. The Links must hit these timed Switches using the Gripshot from the left and right sides of the room, which doing so will open a valve and flood the room, allowing the Links to reach the Water Rod. The Link with the rod then has to create pillars of water to reach the Triforce Gateway on the other side.

In Stage 2, the Links appear on a caged floor overhead a pool of water. A switch in the center must be pressed down by all three Links, which opens another valve and floods the area as Tektites, Water Tektites and skeletal fish appear. The Links must swim over to small platforms to attack them, or use the Water Rod to stun them and bring them closer. After all enemies have been defeated, a steel cage to a flooded passage opens, however it is blocked by a grate. The water can be drained by swimming to the east side where the water valve is. It is also possible to drain the water before killing the enemies. Doing this gives the Links more solid ground as they fight. One Link must create a bridge to the valve using the Water Rod, while another Link turns its wheel by grabbing the wheel's post with the Gripshot. The Links can then walk under the grate to a platform that can be reached using the Water Rod. Another water valve must be opened using the same method as before, re-flooding the room and allowing the Links to reach the Triforce Gateway.

In Stage 3, the Links find themselves trapped in a caged enclosure with an Octorok. The Links can escape the enclosure by using the Gripshot on the cage's panel, which will flip around and drop the Links outside. The Links with the Gripshots escape the cage and press two switches, opening the cage door so the other Link can escape. Outside the cage, the Links find a locked gate and a valve near one of the platforms, reachable only with the Water Rod. Opening the valve raises the water level. The Links can then reach another cage panel by having one Link lead them with the Water Rod. On the other side, the Links can find a chest containing 20 Rupees, and a Raft that can be moved towards a chest containing a Key and a switch by using the Gripshot on a post. Pressing the switch opens the cage door. As the gate is submerged underwater, the Links cannot use the Key just yet. The valve must be turned again to lower the water, after which the Links can use the Raft and move it with the Gripshot to transport the Key to the gate where the Triforce Gateway is.

Stage 4 is where Arrghus is fought in a pool.

At the end of the Level, three Treasure Chests can be opened. Two contain the same Material, and one contains another.

The Water Temple appears as part of the Lake Hylia (Stage) Stage in Hyrule Warriors. This stage is a part of Sheik and Impa's quest to close the Gate of Souls located inside the temple. An updated version of Dark Link's chamber appears, where Wizzro, disguised as Zelda, is fought.[6]

Defenders of the Triforce