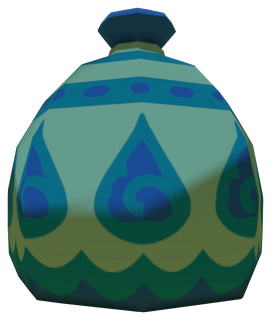 In The Wind Waker, Water Pots are primarily used in Dragon Roost Cavern to cool pools of magma, creating temporary platforms of solidified rock to either cross said pools or to ride up spouts of magma to higher ground. Water Pots also appear in the Gohma segment of Ganon's Tower, albeit with no special purpose.

Water Pots, like regular Pots, can also contain items when broken with a Sword, such as Hearts or Arrows. Water Pots are also capable of extinguishing flaming Boko Sticks. When thrown onto Magtails, they immediately curl into balls, temporarily pacifying them.

Water Pots in Four Swords Adventures appear in a few Stages. In The Mountain Path, they are used to extinguish swaths of flames. In the Lost Woods, a Deku Scrub named Dekki asks for the Links to bring him three different items in order, one of which is a pot with water in it.[2] They can be found in houses and caves.