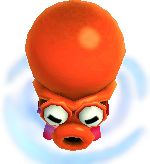 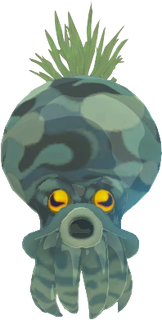 Water Octoroks are the only type of Octorok that appear in all of the Drablands prior to the Den of Trials.[3] They are encountered in bodies of water and are most commonly found in water-themed areas, such as Riverside and the Flooded Zone of the Den of Trials. Water Octoroks hide underwater, staying in one spot with only their shadow and a small whirlpool visible; however, they will pop out of the water if any of the Links are near them. While above water, Water Octoroks shoot rocks at the Links, inflicting one Heart of damage upon impact.

Water Octoroks are commonly found in bodies of water in West Necluda and Hyrule Field in Breath of the Wild. They are now different from the regular Octoroks, being colored with a plant on their head. Like the other variants of Octorok in Breath of the Wild, Water Octoroks camouflage with their environment, staying submerged underwater in one spot, with only the plant on their head visible, and their blue color blending in with the water. Once Link gets close enough to a Water Octorok, it will spot him and begin to leap out of the water every few seconds to spit a rock at him. Link can be hit with a Water Octorok's rock while moving due to its ability to track his movements both horizontally and vertically, aiming its rocks for the direction he is moving. Link will always be hit by its rocks if walking or, if close enough, running in a straight line. While it is raining, Water Octoroks will inflate like balloons and float above the water due to the drop in barometric pressure that occurs during rain, causing their internal Octo Balloons to inflate.[4]

Like many Octoroks throughout the The Legend of Zelda series, Link can defeat Water Octoroks by guarding with any Shield to deflect their rocks back towards them. If Link is close enough, the rock will hit the Water Octorok after being deflected and instantly defeat it. A Perfect Guard will send the rock flying back faster, allowing kills from a greater distance. Alternatively, Link can defeat Water Octoroks by shooting them with any type of Arrow, even if they are below the water's surface. Link can also cut the plant on a Water Octorok's head by shooting it with an arrow or slashing it with a Sword, causing it to emerge and look around before retreating back into the water. This leaves it vulnerable, giving Link an opportunity to shoot it while it is above the water and not spitting a rock. The plant will grow back shortly after being cut. Link can also defeat Water Octoroks by detonating a Remote Bomb in the water or by using Urbosa's Fury, even if they are hiding underwater. The Stasis Rune can be used to suspend them in time. If Link gets close to a Water Octorok, such as with the Cryonis Rune or a raft, he can hit it with any melee weapon after it jumps out of the water. Despite having eight health points, Water Octoroks will die from any amount of damage dealt to them. They can be revived without the occurrence of a Blood Moon. Upon defeat, Water Octoroks may drop any combination of several types of crabs and fish, Octo Balloons, Octorok Eyeballs, Octorok Tentacles, or snails.