Zelda Wiki
Register
Don't have an account?
Sign In
Advertisement
in: Enemies, Water-Related Enemies, Enemies in The Legend of Zelda TV Series 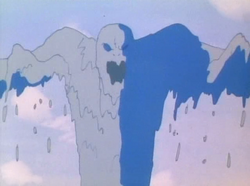 Crissword
Crossbow
Water Monsters are enemies featured in the "Fairies in the Spring" episode of The Legend of Zelda TV series. As the Royal Water Park is nearing completion, these monsters begin appearing and scare the workers away.[1] When Link and Princess Zelda go to the park to investigate, they are attacked by a water monster that the young hero easily defeats with his Crissword. Later on, after the duo defeat an eel that almost drowned Zelda, both the princess and the hero are grabbed by two crab-like water monsters. Once they manage to defeat them, King Harkinian arrives to the scene but is soon grabbed by a tentacle that comes out of one of the pools and drags him in, although Link is unable to find the monster or the king.[2]

The water monsters once again appear when Link and Zelda reach the Fairy Spring. The young hero zaps them easily but this time, they regenerate. As Link the creatures, Zelda notices that the beams creating the monsters are coming from a tree and, upon further investigation, discovers that the monsters were being created by Spryte's sister.[3] She explains that someone was draining their spring, so they were creating the monsters as a mean of defending their water supply.[4] When King Harkinian, who was actually with King Oberon all along, explains the situation to the fairies, all is forgiven and the water monsters stop appearing so that both humans and fairies can enjoy the water park.[5]