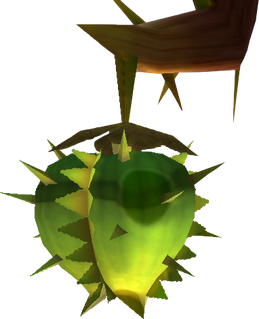 Water Fruits are found growing from floors, walls, and ceilings. They consist of a thin stalk culminating in a large, spiny, green pod. As the name suggests, this pod is filled with water. Touching the fruit with his body harms Link, but he can safely make use of the fruit by severing the stem with the Beetle or by skewering the fruit on his Sword to carry it.

All of Link's uses for the Water Fruit have to do with using its internal fluid to quench dangerous heat. If a Water Fruit's water is deposited in the mouth of one of the frog carvings found in and around the Fire Sanctuary, the corresponding fire barrier will be deactivated. If the water from the fruit is dropped into lava, it cools the lava around the point of impact enough to solidify it and create a platform that Link can stand on without injury, similar to the Water Pots in Dragon Roost Cavern in The Wind Waker. If there is a current in the lava, Link can ride the platform in the direction of the current. These platforms are temporary, though, as eventually the heat of the surrounding lava causes them to re-melt. Fortuitously, on moving lava platforms this generally does not happen until they reach their destination. Lastly, a Water Fruit may be used to make a Magmanos vulnerable by solidifying it, in a fashion resembling the use of the Sand Wand to make Gerunes vulnerable in Spirit Tracks. Once the Magmanos is solid, Link can dispatch it with repeated sword blows.

In Hyrule Warriors Legends, Water Fruit appears as a Plant-type Food. It is imbued with the Water Element. When consumed by a Companion Fairy in the Dining Room of the My Fairy mode, Water can increase the Fairy's Trust level and personality traits.