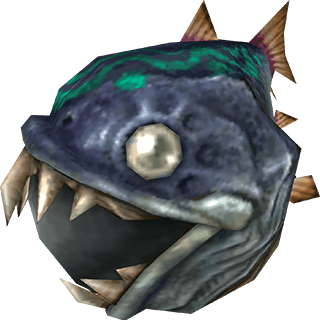 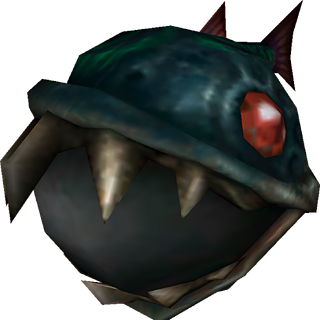 Bomb
Water Bombs are recurring Items in The Legend of Zelda series.[1][2]

Water Bombs can be bought from Barnes Bomb Shop in packs of five for 30 Rupees, packs of 10 for 60 Rupees, or packs of 15 for 90 Rupees. They first become available once Link has received the Zora Armor from Rutela, and are essential for gaining access and exploring the Lakebed Temple. Since Link can only carry one kind of Bomb per Bomb Bag, he will need at least one free bag to carry the Bombs inside. Water Bombs appear as blue fish with round explosives in their mouths, which greatly resembles Bombfish. Barnes, however, claims his are handmade.[3]

As aquatic Bombs, Water Bombs can be used to destroy certain walls, debris, and enemies that are underwater. To use them while underwater, Link must be wearing the Iron Boots. Water Bombs can also be used out of the water as well, however, they are much more costly than regular Bombs to use for this purpose and Link can only carry half as many.

Link can also catch Bombfish with the Fishing Rod in certain areas and add them to his Water Bomb inventory.

In Hyrule Warriors, Water Bombs appear as Item Cards in Adventure Mode. They are obtained by winning certain Battles that offer them as a reward, or they can be bought in the Item Card Shop. Water Bombs are used to destroy boulders on bodies of water to reveal secrets.[2]