Zelda Wiki
Register
Don't have an account?
Sign In
Advertisement
in: Swamps, Locations, Locations in The Wand of Gamelon 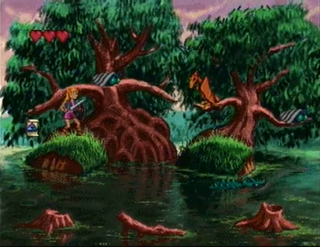 Washubi Swamp is a location in The Wand of Gamelon.[1] It is unlocked after Sakado is completed.

Washubi Swamp is a large swamp in the northwest of Gamelon. Much of the area is flooded in deep, murky water, submerging at least half of the surrounding forest's trees. Very little land is provided, requiring that Zelda climb the trees to progress further. The deep water poses a grave threat to Zelda, and means instant death should she fall in. The Swamp is home to numerous Lowders and Arpagos, as well as Arkadais that swim back and forth in the water. The Arkadais can also be ridden between land.

The Swamp is split into two sections. The first section has a small hut at the end, which immediately leads to the next section. In this area, Arkadais now periodically submerge underwater, requiring that Zelda time her jumps more carefully. At the end of this portion is a large hut on an island, where the hermit Grimbo lives. He requests that Zelda bring back some Hanyu Spores. Once Zelda brings him the Spores, he uses them to combine with Zelda's glove to craft the Power Glove. A Triforce Map appears in Grimbo's hut, and upon completion of the stage, Hanyu Forest is unlocked.