Not to be confused with Mamu. 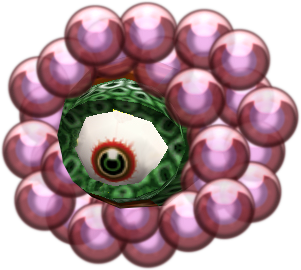 Wart is a Mini-Boss in the Great Bay Temple and the Secret Shrine in Majora's Mask.[1][note 1]

Wart is a huge-eyed creature that slides around trying to hit Link. At the start of the battle, Wart hovers on the ceiling. In order to initiate the fight, Link must look upwards to get its attention. Afterwards, Wart will descend and hover slightly off the ground, completely surrounded by a mass of blobs, rendering it immune to any direct damage. In order to damage Wart, the young hero must destroy the surrounding blobs with any offensive or long-range weapon. The blobs are incapable of being destroyed while on Wart, so Link must knock them off and destroy them before they latch back on. Bombs, Deku Nuts, and Fire Arrows are some of the most efficient methods, as they knock many blobs off at once and may damage Wart as well.

For each blob that is destroyed, a gap in Wart's defensive armor will appear, giving Link a chance to strike it in the eye as the armor moves around. Occasionally, Wart will close its eye while it is moving around the battlefield, preventing the young hero from striking. After Wart has sustained enough damage, it will shed all of the blobs and dart around the room in the young hero's direction. The blobs surrounding Wart will jump around the room, serving as a distraction. In order to defeat Wart, Link must strike it in its eye while it is facing him.

Once defeated, a Treasure Chest containing the Ice Arrows in the Great Bay Temple or 100 Rupees in the Secret Shrine appears.

In Majora's Mask, Wart shares its Italian and Japanese name with Arrghus, Arghus and ワート (Wāto), respectively. In Majora's Mask 3D, Wart's French, Spanish and German names were changed to match Arrghus's name in those languages.