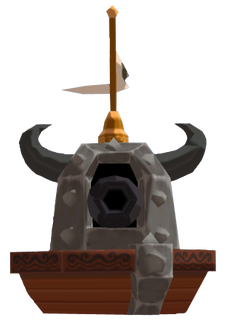 TWWTWWHD
A Warship from The Wind Waker

Cannon
Warships are recurring Enemies in The Legend of Zelda series.[1][name reference needed]

In The Wind Waker, Warships can be sink with three hits from the Cannon, usually leaving a Ring of Light and a Treasure Sphere. Sailing near a Warship will prevent them from attacking Link. Their attacks can also damage other Warships and enemies. A golden Warship can be found in Needle Rock Isle, protecting a Triforce Chart.[2]

In Hyrule Warriors Legends, Warships do not appear as enemies, instead, they are used to destroy Stone Heads blocking the way. To do so, a Warrior must use the Hammer on a peg next to the Warship in order to make it shoot, destroying the stone in the process. In the Adventure Mode Great Sea and Master Wind Waker maps, they make Warriors take double damage until they are removed with Cannons.