Zelda Wiki
Register
Don't have an account?
Sign In
Advertisement
in: Objects, Objects in A Link to the Past, Objects in Link's Awakening,
and 17 more

Not to be confused with Warp Holes. 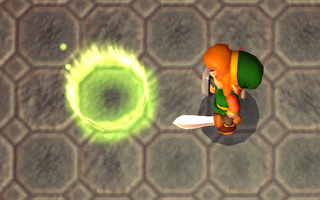 Warping
Warp Points,(ALBW)[1] also known as Warp Zones,(FS)[2] and Blue Lights,(ST)[3][name reference needed] are recurring Objects in The Legend of Zelda series that directly Warp Link from one location to another. They often appear as a circle of light on the floor that can be walked into to Warp.

Link's Awakening features Warp Points that appear after the dungeon's miniboss is defeated and warp Link between the miniboss chamber and the dungeon's entrance.

In the Game Boy versions the portal appears as a glowing red circle surrounded by four swirling orange orbs. In the Nintendo Switch version the portal is a glowing blue circle of light with swirling blue orbs, and Link must stand on the portal for several seconds in order to activate it.

Ocarina of Time has Warp Points after each Boss that send Link back to the outside entrance of the Dungeon. They appear as glowing blue circles of light on the floor and encase Link in crystal before carrying him out.

Majora's Mask has Warp Points that are identical to the ones in Ocarina of Time which send Link back to the entrance of the Dungeon after a Boss. They will also automatically remove any Transformation Mask Link is wearing when he walks in. They also appear as glowing blue circles of light on the floor and encase Link in crystal before carrying him out. There will also be a Warp Point at the beginning of the Dungeon after the Boss has been defeated that will allow Link to Warp back to the Boss room.

Oracle of Ages has red Warp Points after each Miniboss that send Link back and forth between the Miniboss room and the first room of the Dungeon. Oracle of Ages also has ten Time Portals around the Overworld that can send Link between the past and the present when the Tune of Echoes is played. They appear as brown symbols on the ground. In a Linked Game, a Warp Point will also appear by the Maku Tree. This will Warp Link to and from the true final area of the game, the Room of Rites. It appears as spinning blue energy on the floor.

In Four Swords, Warp Zones appear as a set of glowing circles on the floor. The Links must stand on them simultaneously to activate them and Warp to another floor of the level.

The Wind Waker features many Warp Points throughout the game. Many Dungeons have big pots known as Warp Jars. Link can climb into them to Warp and pop out of another Warp Jar in the Dungeon. Dungeons will also have a Warp Point at the end of each Boss that will send Link back to the outside entrance of the Dungeon. They usually appear as sparkling, spinning circles of wind that lift Link into the air before Warping him out. In the Wind Temple and Earth Temple, they appear as sparkling pillars of light that shine from a Triforce on the floor. Two Warp Points can be found in the Great Sea as well. One is found near the entrance of the Tower of the Gods and appears as a glowing, yellow ring of light in the sea. When Link sails into it, it will sink him and The King of Red Lions below the sea to Hyrule Castle. The other is found just as entering the Forsaken Fortress and appears as a glowing, purple ring of light in the sea. Just like the other Warp Point, it will sink Link and The King of Red Lions below the sea and serve as a shortcut to Ganon's Tower.

Warp Points appear in The Minish Cap in three varieties: blue, green, and red, all of which appear in Dungeons. Blue Warp Points normally appear midway through a Dungeon, after Link has achieved a significant milestone such as defeating a Sub-Boss, acquiring an Item, or unlocking another portion of the Dungeon. Red Warp Points normally appear directly before the Locked Door that leads to the Dungeon's Boss; both blue and red Warp Points operate in both directions – one of each is located in the entrance of the Dungeon, and Link can travel freely between them. Green Warp Points, however, only operate in one direction, and only appear in the Boss's room after they are defeated.

After each Boss in Twilight Princess, Midna creates a Portal in the floor that acts as a Warp Point. It will briefly transform Link into particles of Twilight before he materializes again at the outside entrance of the Dungeon.

In Phantom Hourglass, there are Warp Points in each Dungeon that Warp Link back and forth between the room right before the Boss and the first room of the Dungeon. There will also be a Warp Point after the Boss that will send Link back to the entrance of the Dungeon. The Temple of the Ocean King has Warp Points throughout the Temple that send Link back to the entrance if he wishes to leave. All Warp Points in Phantom Hourglass appear as glowing circles of light on the floor. However, while almost all of them are blue, there is one type of gold Warp Point that appear as Link progresses through The Temple of the Ocean King. This Warp Point not only allows him to Warp back to the entrance, but saves the time used to reach it so that Link can continue his progress without starting over at the beginning of the Temple.

In Spirit Tracks, Blue Lights appear as identical counterparts to the blue Warp Points in Phantom Hourglass. They are found after each Boss and will send Link back to the entrance of the Dungeon. Spirit Tracks also has orange Warp Points in the Dark Realm that Warp Link and the Spirit Train around the area when driven through.

In A Link Between Worlds, Warp Points can be found within Dungeons.[4] They appear after each Sub-Boss is defeated and will Warp Link back and forth between the Sub-Boss room and the first room of the Dungeon. They appear as circles of glowing green light on the floor.

The orange tile Warp Points from A Link to the Past also appear in some Dungeons and Treasure Hunter Caves, where they Warp Link between different areas within the Dungeon or Cave.