Not to be confused with Paintings, a result of Yuga's transformation magic in A Link Between Worlds.

Wall Merging is an ability in A Link Between Worlds.[name reference needed] 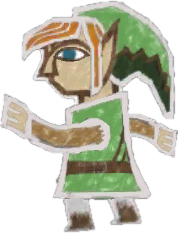 Wall Merging is used by multiple characters in A Link Between Worlds such as Yuga and Link. Through using his staff, Yuga can transform himself into a two-dimensional painting, merging into walls to evade attacks. He also has the ability to inflict this on other people, though other characters afflicted by his magic are normally incapable of acting on their own.

This ability is first seen in the Sanctuary, wherein Yuga transforms the Captain into a drawing on the wall and Seres into a framed painting. When Link attempts to attack him, Yuga merges into the back wall of the Sanctuary, unaffected by his attack. He later uses his magic to imprison Osfala at the Eastern Palace. During the following battle with Link, Yuga periodically merges into the wall in order to avoid Link's attacks. After the battle, Yuga attempts to dispose of Link by imprisoning him within the wall as well. Shortly thereafter, Ravio's Bracelet activates and frees him from the wall. From then on, the Bracelet allows Link to move within walls, much like Yuga.

When wall merged, Link is unable to use items, except for the Bow of Light. He is also unaffected by enemies and hazards, remains at the same height on the wall as when he entered it, and can slip around otherwise impassable corners and in between iron bars, making it largely a puzzle-solving mechanic. Link can also collect items that are drawn on the walls such as Hearts and Rupees. He can also detach lost Maiamais from walls by exiting behind them. When Link is in this form, the Energy Gauge slowly drains, acting as a timer before Link must return to his normal form. When it would otherwise be impossible for him to exit from a wall, the gauge simply stops until he moves to a location where he may do so. The Energy Gauge can be extended by obtaining the Stamina Scroll, thus allowing Link to stay wall merged for longer.

While Link is collecting the Pendants of Virtue, Yuga continues to imprison the other Sages in framed paintings. When Link confronts Yuga in Hyrule Castle, Yuga seals Princess Zelda within a portrait alongside the Sages. Once this has been done, he fights Link once more, creating copies of himself that are capable of merging into walls as he is. Yuga then combines with Ganon, which resulting earthquakes cause several Fissures to appear all over Hyrule and Lorule, connecting the two worlds. Link is thus able to travel between the two kingdoms by entering these cracks while he is merged with a wall.