New to this Section

The Gust Jar
Add a photo to this gallery

Madderpillars
Add a photo to this gallery 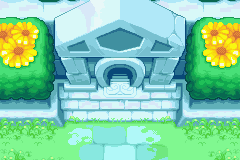 Welcome to the first dungeon in The Minish Cap, Deepwood Shrine. You can only go north from here, so go north and push the frontmost stature to the left. Go through the door. Defeat the enemies then step on the light switches located next to each light. Open the treasure chest that appears in the center of the room for a Small Key. Use the key on the door on the northern part of the room. Defeat the enemies and pull the leaver on the northeast corner. The same idea applies to the mushroom. Pull it and go flying over the water. Go through the room to the north.

On the east side of the room, there are stairs leading to the side of a barrel. Light the switch and climb back down. Now walk into the barrel and exit through the other opening. Climb up these stairs, but this time there are two switches. Push the stature to the lift and you step on the other switch. Now the barrel rolls! Roll and exit when the door is over the bottom-left stairs. Go through the door to the west. Defeat the enemy and pull the mushroom back as far as it can go. Release and claim the Dungeon Map! You will also see a piece of a heart, but you cannot get that now. This time, pull the mushroom back about halfway and go through the door to the left. 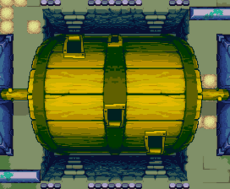 In this room, defeat the enemies and push the pot on top of the switch. Go through the door on the southern wall. Push one statue onto a switch and then push the other into the center of the square. Go around the statue and push it onto the switch. Claim the treasure, a Small Key, and leave the room. Backtrack to the barrel room, and this time come out of the top-right corner of the barrel. Go to the east wall and open the door. Pull back the mushroom and cross the bridge. Now pull the mushroom and fly to the southern end of the room. Go through the door. Defeat the enemies in this room, then go and pull the right statue one spot to the right of the switch. Now push the left statue onto the switch and go through the door.

After you win the battle, claim the dungeon item, the Gust Jar. I would recommend having this and your sword equipped. Suck in the web covering the door on the south wall and go through the door. Claim the Piece of a Heart (#3/44). Backtrack two rooms and defeat the enemies. Suck in all the stuff on the ground and step on the switches. Two treasure chests will appear and a portal will open to a piece of a heart. We will pick that up soon. Collect the treasures, two sets of 10 Mysterious Shells. Go south a room and push the block to the left. Suck up the stuff on the ground to reveal a switch. Step on it and claim the treasure, 10 Mysterious Shells, again. There are more mysterious shells you can collect by repeating the process, but I will not be covering them. Go down into the barrel and suck the web off of the door in the center. Drop down to the lower level.

Suck the lily-pad closer to you and step onto it. Go down the waterfall and continue along the path. Go through the opening on the east side of the room. Climb up the stairs and push a pot onto the switch. This will lower the gate allowing you to pass. Go passed the gates and enter a familiar room. Park the lily-pad next to the torches and get off. Defeat any enemies, and if you haven't already done so, grab the compass. If you have been following this guide, don't worry, we already did that. Push a pot onto the switch and walk over your lily-pad and claim the Small Key. Get back on the lily-pad and backtrack a few rooms. Back in the room where you found the lily-pad, go north and enter through the locked door.

Pull the mushroom south and fly. Continue going around the room until you reach the big, blue chest. This contains the Big Key, allowing you to enter the boss room. Step on the switch and a second portal will appear. Step onto the switch and this will take you to the beginning of the dungeon. Remember the blue portal we made, well step on it and claim the Piece of a Heart (#4/44). You now have another heart container! Step back onto the portal and use your gust jar to suck off the web over the left door. You will see a treasure chest blocked by a block. Push the block to the right and claim the treasure, a red rupee (20 rupees). Go back up the stairs and go down the web-covered door on the right. Suck the mushroom to the right and then suck again and land in front of the boss room...

You got the first element, the Earth Element! It is for some odd reason purple, but never mind that. Pick up the heart container and step onto the green warp. This will take you to outside the dungeon. Ezlo will blab as usual, and after he is done, go back into the town. Exit Festari's house and go west to Gentari's house. Enter and talk to him. He will let you go through a shortcut out of town. He will also tell you about your next location, a place to fix the broken sword.

Retrieved from "https://zelda.fandom.com/wiki/Walkthrough:The_Legend_of_Zelda:_The_Minish_Cap/SuperAlpaca/Part_2?oldid=446490"
Community content is available under CC-BY-SA unless otherwise noted.