New to this Section

Gentari
Add a photo to this gallery

A Map of Hyrule

A Jabber Nut
Add a photo to this gallery

ChuChus
Add a photo to this gallery

This is the beginning of The Minish Cap. Please do not get stuck here. If you do, you are hopeless. Princess Zelda walks into your house and says his to Smith, your grandpa. He is all shocked and asks her if she sneaked out of the castle and came all this way alone. Then those two go into a boring discussion about the Picori Festival. Smith yells at you to wake up and you get to control the character. Just walk down the stairs and go into the room on the right. You will see a treasure chest, which you will get in a second. Right now, Smith and Zelda start talking to you. Now you get Smith's Sword! More blah. Zelda leaves the house and now you can get the treasure chest. It is a Red Rupee, worth 20 rupees. Leave the house.

Now Zelda starts hopping and says to come over there. Do just that. Go down the steps and to the left side of the house. She will run up more. Just keep following her. Walk into Castle Town. where the Picori Festival is taking place. Just follow her and talk to her. She will run to a new thing. Rinse and repeat. Zelda will eventually go to a booth with the banana woman, where she wins a prize, either a Heart Piece, a Giant Red Rupee (worth 200 rupees), or a Small Shield. Sadly, Zelda picks the shield, and gives it to you. You got a Small Shield! It is embarassing, though.

Now it is time to take the sword to the castle. You just need to walk north, with Zelda following you. Now the music changes. Zelda tell you to hurry to the castle. Go up and Zelda is freaking out. A Business Scrub is attacking the princess! When it shoots you, just deflect it back with your tiny shield. He blahs and will move. Keep going north and enter the castle garden. There will be a bunch of guards wandering aimlessly. Just keep going up until you reach the entrance to the castle, with as short, funny looking man standing in front of it.

His name is Minister Potho, and you need to talk to him. Zelda will leave and Potho will take the sword. Potho asks you to join in the ceremony. Then there is a cut scene explaining the history of the blade that the winner of the sword competition gets to touch. Yes, the competition is for touching a sword. The King, Daltus, and Zelda will come out and Vaati, the winner of the competition comes and laughs evily. Vaati reveals his plans and the guards attack, just to be flung away... Vaati really wants to touch that sword. He breaks the sword in half and a bunch of evil comes out of the chest. By this point, the king and Potho are long gone, and Zelda is questioning Vaati. He, like most villains, explains his plan so the hero can defeat him. Link moves in front of Zelda and gets out none other that the tiny shield. Link is flung out of the way, and Zelda is turned to stone. Let's hope she wasn't picking her nose! Vaati goes to the open chest and nothing is there. He now has s tissy fit. He warps away.

You wake up in a bed with a maid watching you sleep. You wake up and can control Link again! Leave the room and go into yet another cut scene. Smith is there talking to you. They even hauled Zelda into the castle! The king tells the guards to go look for Vaati. He talks about the Picori, also. You are sent to go find them. You get two going away gifts, also. The Broken Picori Blade and Smith's Sword. Well, technically, you just get the sword back... But that is beyond the point! You also get a map of Hyrule! Not much is on it, just where you have been and a square in the south-east section with a check-marking the next destination. Go south and around the big square wall thing in the middle. In the next room, just go south and leave the castle. Go south to Castle Town and face a few enemies, octoroks. One might drop a rupee. You cannot get to town, because rocks somehow appeared in front of the northern entrance to town. But fear not! There are a few people randomly sawing logs! Just go right for now. If you go a little north, you will find some grass and some enemies, including a new one, a Beetle. No, not Beedle, the shop owner, beetles, the annoying things that attach to you.

There are some twigs blocking your way. Just chop them down and continue to the east. You are now at Lon Lon Ranch! Just go south and get ready to face a newer, more annoying enemy than the other two. That is right. I am talking about the evil Acro-Bandits! Try to attack the one with your sword before more appear. Somehow, a few soldiers got stuck out here. You cannot go into town here, either. Follow the path south and onto the next screen. 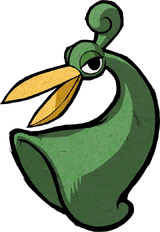 This section is called Eastern Hills. Continue south and you will see some more boulders blocking your path to your house and the town. Were they doing this on purpose? Yesh. Well, just go east (hey, that rimes!) and enter Minish Woods. North, you will see water. Note: YOU CANNOT SWIM!!! Go east and pass some trees. You will pass some weird looking things, don't worry. We will be back. Go over the unusually narrow bridge. to the north you will see more water and a ChuChu, this one being green. At this point, it will start to get foggy. Just go south. You will get to the corner of the world and find a weird stump with a crack on top of it. Go west (finally!) and north. You will hear screams when you get onto the tiny puddle. You will now see a bird-hat thing getting attacked by two octoroks. If you go a little more to the west, you will see the first dungeon, but you are too small to git into it. Pick up your first Piece of a Heart (#1/44).

Now backtrack to after the suspiciously narrow bridge and you will get shocked for some unknown reason when you see the hopping hat! He has a temper tantrum. Defeat the two octoroks. You will automaticly walk up to the hat thing and will start to question you being in the woods. You tell him why and he decides to help you and you team up. He reveals his name as Ezlo. Just walk away and he will yell at you. Do this twice more and he will attack your face. He ends up on your head. He will start blahing. Also, if you need help (not likely, you have this walkthrough...) just hit the SELECT button on your GBA or a Nintendo DS. Now go south until you reach the funny looking stump again. He blahs about the Minish, telling you that they are the same as the Picori and that they are tiny. And apparently the stump is a portal. Just jump onto the stump and press R to shrink. He then talks about dangers of being small. Just go west and take the southern route. Go into the log and step onto a lily pad. Get off at the north part and go into the big town. Go north into the town. 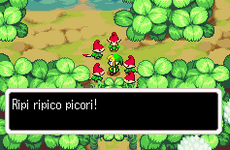 Congratulations! You have just entered the tiny town called Minish Village. You will see a bunch of Minish speaking a funny sounding language, somewhat like Pokemon. Go right and up past the bridge until you reach a shiny house. Go east onto his deck. Grab the piece of a heart (#2/44) and go into the shinny house. You will meet Festari, a Minish. He tells you to find a jabber nut in a barrel house to the south. Do just that. Go south and then a little to the east. You will find the building. You will have to solve a puzzle, though. Just push the first box the the left or right. Grab and eat the Jabber Nut. Now you can understand the Minish!

Go up the ladder in the house and go to the northwest corner of town. There is an old Minish inside that will tell you about the elements. No, not Neon, Gold, Boron, Tungsten, and Sulfer, but Earth, Water, Wind, and Fire. He marks your map with the locations of the four elements. Now, go back to the shiny house with Festari inside. Talk to him and he will move. Go north and enter the first dungeon...

Retrieved from "https://zelda.fandom.com/wiki/Walkthrough:The_Legend_of_Zelda:_The_Minish_Cap/SuperAlpaca/Part_1?oldid=446489"
Community content is available under CC-BY-SA unless otherwise noted.