Zelda Wiki
Register
Don't have an account?
Sign In
Advertisement
in: Objects, Transportation, Objects in Twilight Princess,
and 2 more 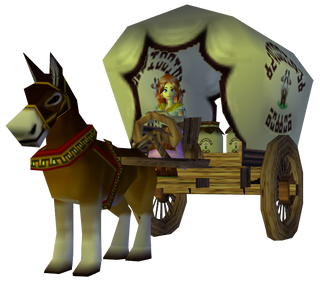 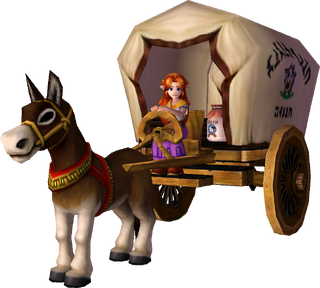 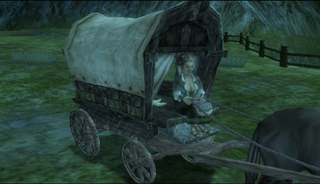 "Cremia's Carriage"
Wagons,(TP)[1] also known as Carriages,(MM)[2][note 1] are recurring Objects in The Legend of Zelda series. Wagons go unnamed in Breath of the Wild.

If Link successfully defends Romani Ranch against the Ghosts in Majora's Mask, Cremia will welcome him to join her in her Carriage ride to Clock Town, which departs from Romani Ranch at 6:00 PM on the Second Day.[4] As Romani Ranch's access to Milk Road was blocked off, the Milk Bar was unable to restock their supply of Chateau Romani, and so Cremia must ride to Clock Town to replenish their stock.[5] If Link joins her on her trip, he will begin the "Protect the Milk!" Event.[6]

As Link and Cremia make their way to Milk Road, Cremia discovers that the Road has been blocked by a gate.[7] She recognizes it as the dirty work of the Gorman Brothers and advises Link to ready his Bow as she takes the Carriage along a detour through the Gorman Track.[8] While traveling the Track, the Gorman Brothers chase after Cremia's Carriage while wearing Garo's Masks to hide their identity. In order to protect her Milk supply, Cremia instructs Link to deter them with his Bow while they escape.[9] If the two manage to escape into Termina Field without any of the Milk Bottles being broken, Cremia will thank Link with a gift.[10]

In order to safely transport Prince Ralis to see the Shaman, Renado, Telma makes use of a Wagon to travel from Hyrule Castle Town to Kakariko Village in Twilight Princess. Telma also enlists the aid of Link to protect them from the monsters that prowl the territory between the two settlements.[11] As the Wagon progresses through Hyrule Field, the monsters will attempt to set the Wagon on fire, requiring Link to snuff the flames with the Gale Boomerang.[12]

The remains of Wagons can be found scattered across Hyrule in Breath of the Wild. Wagons primarily appear along the roadside and can be searched for Materials.

Transportation in The Legend of Zelda series
Community content is available under GNU Free Documentation License unless otherwise noted.
Advertisement