Not to be confused with Barba. 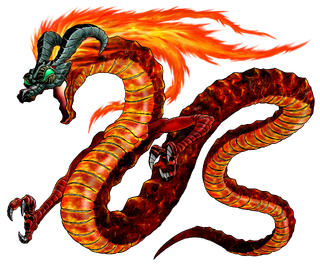 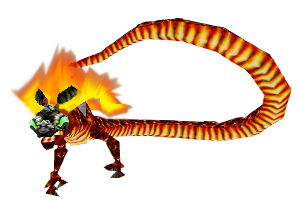 Volvagia is the Boss of the Fire Temple in Ocarina of Time.[2]

Volvagia was an ancient Dragon that lived in the depths of Death Mountain and was essentially the spirit of the Mountain.[3] It was said that a legendary Goron destroyed it with the use of the Megaton Hammer. By the time of Ocarina of Time, Ganondorf revived the Dragon to secure the Fire Temple from intrusion. He also fed Gorons to Volvagia to make an example to other races that might revolt against him. Incited by Darunia's son, Link sets out to destroy Volvagia to stop the Dragon from escaping the temple and turning Hyrule into a burning wasteland.

As Link steps onto the main octagonal platform of the boss room, the room shakes and the small rectangular platform behind him sinks into the lava. Then, Volvagia emerges from one of the holes on the main platform. It flies around the room whilst breathing fire before entering another hole.

The battle is designed akin to a Whac-A-Mole game, as there are nine holes, and Link must whack the Dragon when it comes out using the Megaton Hammer. On the battlefield, there are pits of fire that Volvagia bursts out of to attack Link. Its head and upper body pop out from pits that are spitting fire. When emerging from a pit, Volvagia swings its flaming hair around to cause damage. Once Volvagia comes out of one of the nine pits, it executes one of three attacks. It will either reveal only its upper half, come out entirely to give chase while breathing fire, or fly up to the room's ceiling to trigger a rockfall.

When Volvagia comes out only halfway, it does one of two things, depending where Link is at the moment. If Link is far away, it breathes fire. If Link is up close, it tries to slash him. Link must get close to the Dragon and strike its head with the Megaton Hammer. Should Link miss the initial window before Volvagia's quick attack, another will present itself just after it is finished, just before retreating back under the platform. Once stunned with the Megaton Hammer, Link can slash Volvagia with the Master Sword or hit him on the head again with the Hammer until the Dragon recedes back into its pit. Eventually, it leaves its pit and attacks Link out on the platform, flying through the air. It can either cause rocks to fall down at Link or follow him trying to burn him. At that point, Link can use the Bow to fend off Volvagia, or he can go to the edge of the platform and hang there while the rocks fall down. Arrows can damage Volvagia, although they cannot defeat it. Its health can be brought down using only Arrows, but it will not be defeated until it is struck with the Megaton Hammer or the Sword while stunned.

After six slashes with the Master Sword while it is stunned, Volvagia will be defeated. Link witnesses the Dragon's body burning into a skeleton and its skull crashing to the ground. It moves its jaw one last time and burns up, rewarding Link with a Heart Container. Darunia then awakens as the Sage of Fire and grants Link the Fire Medallion.

In the Ocarina of Time manga by Akira Himekawa, child Link purchases a baby Volvagia from the Hyrule Town Market, intending to set it free. Instead, Volvagia chooses to follow Link. Eventually, Volvagia learns to say Link's name in thanks for its freedom, and the two part ways.

When Link returns to Hyrule as an adult, Volvagia had been enthralled by Ganondorf into haunting the Fire Temple. Disheartened, Link is forced to slay his friend in order to both save the Gorons and put Volvagia out of its misery. With its dying breath, Volvagia whispers Link's name in thanks for once again being freed.

Later, as Link crosses the Haunted Wasteland, a spectre takes the form of Volvagia's disembodied head, suffering grievous pain, in an attempt to lure Link away from the safe path through the desert.