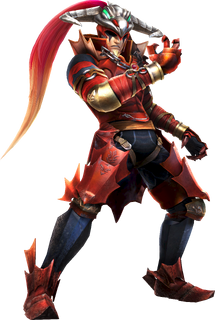 Volga is an antagonist in Hyrule Warriors.[name reference needed] In the version 1.3 update, he is also a playable Warrior. He is a Dragon Knight whose magical powers allow him to breathe fire and turn into a dragon. He also can turn certain parts of his body into dragon limbs, such as his arm. He relies on powerful attacks to devastate his enemies, although he has a moderate attack speed.

Volga, in contrast to his cohorts Cia and Wizzro, favors swift, brutal power over finesse. His weapon is the Dragon Spear which is of the Fire element. His combos tend to be very quick but also strong with good crowd control. Many of his combos involve him changing parts of his body into his dragon form, such as turning his arm into a clawed limb that sends out a shockwave. His fourth combo has him turning into his dragon form and dive bombing the enemy, causing a huge explosion.

Volga is the general of Cia's army, with whom he wages war on the Kingdom of Hyrule. At one point, he traded his soul to Cia for great physical strength.[2] It is implied that he is not actually human,[3] and may possibly be a dragon who can take on human-form.

In "The Armies of Ruin", Volga first confronts Link and the Hyrulean Forces after the Dark Forces lay siege to Hyrule Field. He descends upon the Abandoned Fort after the Hyrulean Forces attempt to secure it, initiating a fight.[4] Link brings his health down to half, before Volga ends the battle and decides to kill Link for his interference. He attacks him with his transformed draconian arm,[5] but is interceded by Impa. Volga attempts to destroy the two of them with a fire blast,[6] but finds they had both survived by a magical barrier created from Link's Triforce of Courage that mysteriously appeared on his hand. Volga then retreats, allowing the Hyrulean Forces to resume their counterattack and to open the Mine Entrance, but swears that he has not been beaten.[7]

Volga again appears in the Valley of Seers in "The Sorceress of the Valley", where he confronts and fights Impa en route to the valley's eastern Keep. She is outmatched by his strength and requests the assistance of either Lana or Sheik. He is defeated by either one and escapes from battle.

After Cia opens the Gate of Souls to the different eras, Volga travels to Skyloft in "Land in the Sky", where he leads the Dark Forces and terrorizes the inhabitants. He faces Link in combat again after Fi connects the islands of Skyloft with the help of Levias. Volga is eager to fight Link again,[8] and just when he is about to be defeated, he mocks him as he regains his health and grows stronger in strength and speed.[9] He is however weakened after Link and Fi pray to the Great Fairy, who sends Fairies to bring Pumpkin Soup directly to Levias. Levias' empowered electrical blast weakens Volga, allowing Link to defeat him and he again retreats.[10] Until Levias intervenes, Volga cannot be defeated normally. Otherwise he will kneel for a moment before mocking Link and restoring all of his health again.[11]

Volga again faces Link a fourth time at the Valley of Seers in the final battle against Cia in the Scenario "Shining Beacon". Cia summons him mid-way into the battle and fortifies him with her life energy. He demands to fight with the Allies' commander and charges after Princess Zelda (or Ruto if playing as Zelda).[12] She however attempts to reason with him instead of fighting, and questions him how he can find joy in using dark magic to fight his battles.[13] She urges him that she needs him to be a noble knight, and not a tool for the Dark Forces.[14] Zelda's words manage to convince and bring Volga back to his senses, and he denounces his alliance to the Dark Forces as the dark power is pushed away from him.[15] He resolves to fight Link one last time in a fair fight and readily advances toward him.[16] Link defeats him again, and Volga admits his defeat but without regrets.[17] It is implied he perishes as he falls over.

In the Master Quest DLC Pack, Cia and her army's backstory and point of view were expanded by additional Scenarios as part of Cia's Tale.

Volga is the dragon guardian of the Eldin Caves, where Cia first encounters him in "The Dragon of the Caves". When Cia first became corrupted by Ganondorf's influence, she entered the Eldin Caves to enlist him in her army as its general.[18][19] Volga however resists and fights back,[3] before eventually retreating from his injuries as reinforcements from his Force arrive to combat Cia's. In the ensuing war between Cia's, Volga's and the Goron Forces, Cia gradually conquers Volga's claimed Keeps before eventually confronting him, fully healed, at the Entry Square Keep. During their second fight, the defeated Lizalfos and Dinolfos Chieftains of Volga's army call upon a pair of King Dodongos to retaliate. Despite the large beasts threatening her progress, Cia manages to defeat Volga as well as a traitorous Wizzro, who had defected to Volga's Force after witnessing their advantage. She enhances them both with dark magic to ensure their loyalty.[20] They swear eternal loyalty to her, with Volga's only desire to fight worthy opponents.[21]