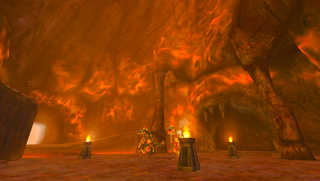 Volcano Summit is a large volcanic cavern found deep inside and near the crater of Eldin Volcano in Skyward Sword.[1] As described by Ledd the Mogma, it is too hot for a normal traveler to explore.[2][3] Link must travel through the summit many times in a row to extinguish the various pillars of flames that are blocking the path to the Fire Sanctuary where Din's Sacred Flame rests.

The Volcano Summit is a super-heated area surrounded by flows of lava located deep inside Eldin Volcano. No human can traverse the landscape without the protection of the Fireshield Earrings, which are obtained after Link completes Din's Silent Realm and enable him to traverse the boiling heat of the Volcano Summit. In addition, there is also a large outside area of the summit composed of large rock pillars covered with vines and a small spring that Link may visit to fill his Empty Bottles with water.

The Volcano Summit leads to the entrance of the Fire Sanctuary, which Gorko the Goron, who has come to the region in search of Goddess Cubes, states is blocked by pillars of flames.[4] In order to extinguish them, Link must pour Bottled Water onto the tongues of the frog statues above them.[5] Later Link has to lead the Ancient Robot Scrapper, who is carrying the Water Basin, through the cavern, fending off the Lizalfos and other native enemies who have settled in the area.[6][7] Eventually they extinguish the flames blocking the entrance to the Fire Sanctuary, allowing Link to continue to his adventure to find the final one of the Sacred Flames.

Later, Link is captured and imprisoned by the local Bokoblins after Eldin Volcano erupts while he is descending into the area. He returns to the summit after escaping and reclaiming his equipment and blade from the demons to find a chamber inside the cavern that houses Eldin the Fire Dragon, who caused the eruption out of an explosion of his power.[8] Link learns the second part of the Song of the Hero from him.