Zelda Wiki
Register
Don't have an account?
Sign In
Advertisement
in: Mechanics, Tutorials, Mechanics in Ocarina of Time 3D,
and 2 more 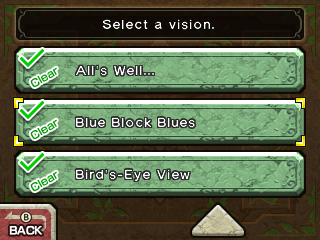 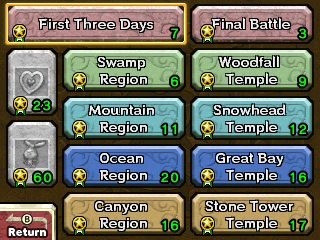 Reveals how to advance in the game to the player
Visions are a recurring feature in The Legend of Zelda series.[1] It is a menu where short clips called Hint Movies can be viewed with the help of Sheikah Stones that demonstrate how to advance in the game instead of completing the puzzle directly for the player like in the "Super Guide" variation of New Super Mario Bros. Wii.[2]

In Ocarina of Time 3D, Visions can be accessed via Sheikah Stones, which are larger, more animated versions of the Gossip Stones from the original game. Link has the option to crawl inside these Sheikah Stones to bring up the Visions screen. From there, he can choose one of the Visions listed and get hints on how to complete a specified puzzle, find a secret, or defeat a boss - after reaching a point in the game close to accessing the subject, or having attempted it. There are two Sheikah Stones which can be found near Link's house in Kokiri Forest and the other one in the Temple of Time. The Visions screen can also be accessed from the Game Over screen.

Visions are not available in the Master Quest mode, and each Vision will only become available once a certain point in the game has been reached or once the player has attempted to solve the puzzle. Once a new Vision is unlocked, it will be labeled in red as "New" on the Visions screen, and it will be replaced with a green checkmark once the Vision has been watched. When the goal shown within the Vision is completed, a green "Clear" will appear next to it in the Vision selection screen.

Visions in Majora's Mask 3D work just the same as they did in Ocarina of Time 3D. As previously, more Visions are unlocked as Link progresses through his adventure. A Sheikah Stone can be found inside the Clock Tower near the Happy Mask Salesman, who points it out to Link at the beginning of his quest to retrieve the Ocarina of Time. Aside from Hint Movies, Link can also view Hint Photos of Piece of Heart and Stray Fairy locations.

Visions return in Skyward Sword, where they can be viewed by talking to Sheikah Stones. They work essentially the same as they did in Ocarina of Time 3D. They are progressively unlocked in the normal quest, but they are all available from the start in Hero Mode. One Sheikah Stone is found outside the sword training room at the Knight Academy in Skyloft, and another appears at the base of Eldin Volcano when it erupts and Link is captured by Bokoblins.

Tutorials in The Legend of Zelda series
Community content is available under GNU Free Documentation License unless otherwise noted.
Advertisement