Zelda Wiki
Register
Don't have an account?
Sign In
Advertisement
in: Objects, Enemies, Objects in Ocarina of Time,
and 12 more 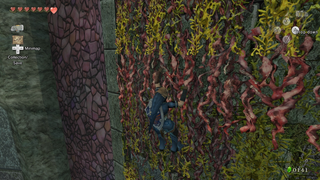 My Nintendo Picross: Twilight Princess
Vines are recurring Objects in The Legend of Zelda series.[1][2]

In Ocarina of Time, vines are used excessively inside of the many dungeons, temples, and overworld. They appear as organic, twisting growths on walls, and are climbed by simply running into them. Not only can Link climb upwards, but also side to side. Often in Hyrule, climbing vines are masked with different textures to give variety. This could be anything from the climbable wall outside of Hyrule Castle, to the rocky cliff face of Death Mountain.

Ladders work similarly to vines in Ocarina of Time, although Link can only climb vertically on these. Link can use his Hookshot/Longshot on vines, to pull himself to the wall and automatically hold on.

A lot of the time Link will find Skulltulas partway up a wall. They are usually camouflaged, leading to unsuspecting adventurers being pounced upon. The best tactic for taking them out is to use either a Slingshot as young Link, or a Fairy Bow as adult Link.

Vines in Majora's Mask are used primarily in the same way and context as in Ocarina of Time. For the most part they look the same, although there are a few textural tweaks. Again, Link can move in all four directions. It's notable that vines are generally used a lot less frequently in Majora's Mask than in its prequel, Ocarina of Time. However, early on in the game, Link is required to save the Deku Princess by cutting through vines to free her from imprisonment.

One feature from the Rod of Seasons is that by changing the season to Summer; Link can gain access to steep cliffs via vines growing along the wall. The vines will not be present during any other season.

Several areas contain a sprouting beanstalk seed in the Past. If these are planted next to a rock wall, a vine will be grown in the Present time period. When left in an open area the seeds wither and die. Few areas require Link to push the same seed around to access more places in the Present.

Thorned variations are used as enemies in the Forbidden Woods

In The Wind Waker, vines have different roles in gameplay, compared to other Zelda games. They appear as enemies sprouting from the ground, and are indestructible. One room including these vines in the Forbidden Woods is particularly reminiscent of a room in the Fire Temple in Ocarina of Time, and the Treasure Chest Game from Majora's Mask: It appears to be a simple room to traverse, but reveals itself as an intricate maze of obstacles that only appear when Link is nearby, and that harm Link if touched.

Vines are also used to suspend objects in the air, and can be cut by Link's Boomerang. By holding down the allocated button, up to five targets can be selected; as a result, five vines can be destroyed at a time. This technique was used in the Forbidden woods to lower a platform, to cut down hanging nuts containing items, and during the boss fight against Kalle Demos.

In Dragon Roost Cavern, there is a platform suspended by ropes which work in a similar way to the vines in the Forbidden Woods; a Spin Attack is required to cut them and lower the platform.

Horseshoe Island employs vines in its golf-like minigame. Link uses the Deku Leaf to blow a Boko Nut into a hole in the ground, which will collapse the vines.

Whenever Link finds a beanstalk seed sprouting, but not fully grown, he can grow these in a desired location. Typically against an inaccessible wall, with a hole in the ground before it. These beanstalks only grow after being watered. The Blue variety grows with regular water from any deep source in Hyrule. The Green variety will only grow with Mineral Water from Mount Crenel.[3]

Some Kinstone fusions cause a Picori's planted beanstalk to grow sky high. This usually leads to the cloudtops, and has a path with a treasure at the end.

Twilight Princess uses vines / vine surfaces in more ways than in earlier titles. An example of the classic use of vines is in Ordon Village, where Link can climb up a large tree after shooting down the bee hive, and scaling the rocky platform near the lake. It is notable that Link climbs a lot slower in this game than the others, probably to be more realistic. Also, new climbable surfaces are introduced in Twilight Princess, including the mesh cliff face just outside of Kakariko Village, and other metal-based wall textures. As in Ocarina of Time and Majora's Mask, Link can use his Clawshot to pull himself towards climbable surfaces. This mechanic is used excessively in the City in the Sky. The Double Clawshots adds further interactivity with vined surfaces. Whilst climbing them normally or 'Clawshotting' to a wall, Link can use his secondary Clawshot to shoot again whilst holding onto the surface. This is so far the only item usable in a Zelda game whilst holding onto a wall.

In Skyward Sword, vines are used in many ways, such as to obtain access to new areas like the floating islands in the Sky. Vines are also used to swing from one area to another, as seen while rescuing the Kikwis in Faron Woods and obtaining the Skyview Temple boss key. It is also possible to climb up and down these types of vines. Rolled up vines can be shot with the Slingshot to release a vine like those previously described. Climbing vines depletes Link's Stamina.[4] If Link is nearly out of stamina on a vine, he may use Stamina Flowers to replenish his stamina gauge. As well as those types of vines, in several areas of Faron Woods as well as Skyview Temple, Link must use rope-like vines as a tightrope and avoid several obstacles in order to progress.

As in Twilight Princess, Link can use his Double Clawshots to advance from one vined surface to another, such as jumping between islands in the Sky with vines draping over the edge. The second Clawshot allows Link to shoot it again while clinging to a wall draped in vines.

As in previous games, Walltulas occasionally guard vine walls. They can be defeating with nearly every weapon, including the Slingshot.