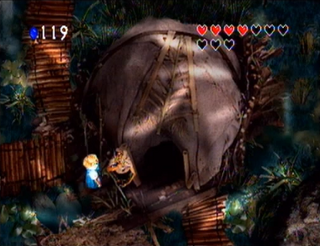 Lake Boruna
Mystery Island
Vendoss, also known as the Forest of Aibon and Barachno Marsh,[1] is a location in Zelda's Adventure. It is a large, heavily forested swamp located in southeastern Tolemac.

The Vendoss swamp is located in southeastern Tolemac, which lies in the center between the Great Dry Canyon, the Seacoast Plain beach, and the East Forest. In the middle of the swamp is a large lake known as Lake Boruna, where the Skotness River flows into from the west. A tiny island with a lone palm tree, known as Mystery Island, can be found in the middle of the lake and can only be accessed by a ferry boat provided by a man named Faust.[2] The swamp is also home to a little village built on wooden boardwalks, which its residents had built as a refuge from Ganon's followers.[1] The inhabitants all live in small, wooden huts.

The swamp can be entered from the west, east and southeast. The west side is barricaded by an iron gate with moving spikes, which a man will remove for 10 Rupees. The swamp can also be entered from the Seacoast Plain beach in the southeast, or from the East Forest in the east — both passages are free and immediately enters the swamp's village. In the village center is Sirram Bew's dome house, where he provides words of insight to passing visitors. A pair of Golden Boots sitting next to a woman outside are required to enter his house. A woman who served as Link's guide through Tolemac can also be found in the village, and gives Zelda the missing Map of the Shrine of Destiny. A merchant in the northern part of the swamp will sell Zelda Repellent for 100 Rupees, which can be used to repel the Swamp Zolas of the area.

The southern part of the village has a pier where Faust runs his boat ferry service. For 2 Rupees, he will ferry Zelda to Mystery Island in the center of the lake. Here Zelda can find a Crystal Heart piece next to the island's palm tree.