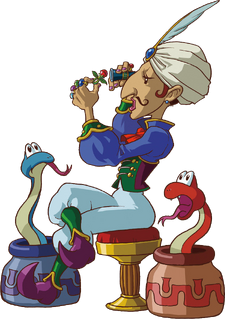 Vasu is a recurring character in The Legend of Zelda series.[2] He provides Magical Ring appraisal and storage services within his shop, Vasu Jewelers.[3] His two pet snakes are used to transfer rings from one game to another.

Magic Rings with unknown properties can be brought to Vasu for appraisal, revealing the rings' true potential. The first appraisal in each game is free, but every subsequent appraisal costs a few Rupees. If Link already possesses a ring identical to the one he just paid to be appraised, Vasu will offer to purchase it. It costs 20 Rupees to appraise a new ring, but Link receives 30 Rupees for rings he sells to Vasu.

All appraised rings are automatically held by Vasu, as Link can only carry a few depending on the size of his Ring Box. Link can return to the Magic Jeweler's shop to exchange rings in his box for ones Vasu is holding, or vice versa.

In front of the counter to either side of Vasu are his two pet snakes, the Red Snake and the Blue Snake. These snakes will allow Link to transfer all his appraised rings between linked Oracle of Ages and Oracle of Seasons files. The rings can be transferred in two ways:

With the Blue Snake, Link can transfer his rings via Ring Link.[7] Two Game Boy Colors can be connected by a Game Link Cable. By connecting Oracle of Ages and Oracle of Seasons in this manner, then talking to the Blue Snake and selecting "Link", a Ring Link can be performed, and thus Link's Magic Rings will be transferred without the use of a password.[8] As with the Red Snake, Ring Links will only work between two linked game files.

Ring Link and Ring Fortunes can only be used on Game Boy Colors, and not Game Boy Advances.