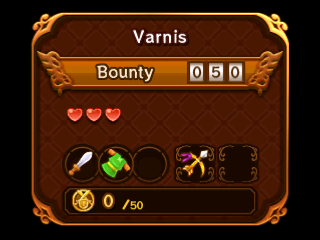 Varnis is the name of one of the 20 possible Shadow Links that can appear in A Link Between Worlds without being met by StreetPass.[1][note 1]

Once Link has spoken to Gramps and enabled Shadow Link Battles, a new signpost signifying the arrival of a Shadow Link will appear at the StreetPass Meadow after every five hours of gameplay, regardless of whether or not the player has received a StreetPass tag. Varnis, having the lowest overall statistics of all the pre-generated Shadow Links, is often the first Shadow Link to be met by this method.

Varnis wears a Green Tunic and wields a Forgotten Sword and no Shield. He is tied with Grisa for having the smallest Life Gauge (three Hearts), he has the fewest Medals won (zero), and is the only pre-generated Shadow Link to carry only one Item: a Rented Bow. He has the lowest possible bounty at 50 Rupees.