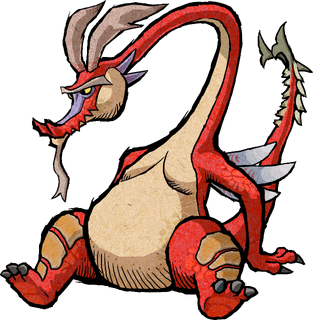 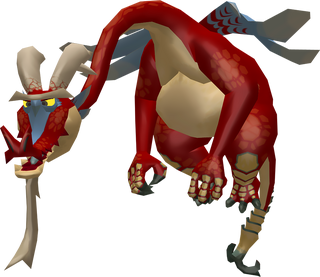 Valoo is a character in The Wind Waker.[5]

Valoo resides at the top of Dragon Roost Island and is the patron deity and protector of the Rito people that dwell there. Valoo only speaks the ancient Hylian Language, so there are few who can understand him, and even his attendant Medli has trouble sometimes. Valoo grants the Rito their wings when they come of age and always protects them from harm.[6] When Link first visits Dragon Roost Island, he finds out that Valoo is in a predicament: he is being tortured by Gohma hidden in the mountain beneath Valoo's high peak. The dragon's change of temperament has prevented young Rito (such as Komali) from reaching him to receive the scale that allows them to grow their wings.[7][8] Moreover, one of Valoo's recent rampages caused a boulder to crash down the mountain, breaking the bridge leading to Dragon Roost Cavern and plugging the nearby spring.[9] Link must defeat Gohma in order to stop the Sky Spirit's rampage and receive Din's Pearl from Prince Komali.

After Valoo is saved, he recognizes Link as a true hero and tells him to use the Wind God's Wind to aid the young hero on his quest.[10][11][12] Later, after Link visits Greatfish Isle, it is Valoo who tells Quill to give word to Link about the whereabouts of the Water Spirit Jabun.[13]

Just before Link and Tetra are about to be defeated by Ganondorf at the top of the Forsaken Fortress, Valoo, Komali, and Quill rescue them. The two Rito swoop in and take Link and Tetra to safety before Valoo unleashes a blast of fire onto Ganondorf's viewing platform in an attempt to kill him. However, just before Valoo departs, the Sky Spirit warns the King of Red Lions that his fire alone cannot possibly destroy Ganon.[14]

Valoo is thought to be a descendant of Volvagia.[15]

Valoo appears as a Trophy and Sticker in Super Smash Bros. Brawl.

In Super Smash Bros. Ultimate, Valoo appears as a Spirit with the ability, Falling Immunity, which grants a Fighter immunity to tripping.