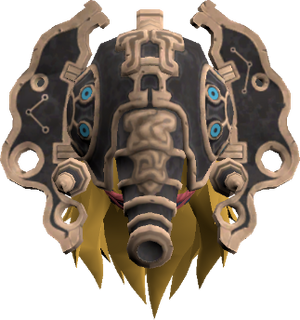 The Vah Ruta Divine Helm is obtained by scanning the Mipha amiibo with the amiibo Rune.[2] When worn, the Vah Ruta Divine Helm provides a basic level of both Guardian Resist Up and Swim Speed Up and also allows Link to view an enemy's remaining health.[3] When paired with the Ancient Cuirass and the Ancient Greaves and each piece of Armor has been enhanced at least twice by a Great Fairy, the three pieces of Armor provide Ancient Proficiency, a Set Bonus that increases the damage dealt from the Ancient and Guardian archetypes of weapons.[3]

The Vah Ruta Divine Helm is based on the head portion of Divine Beast Vah Ruta, which Mipha piloted as the Zora Champion.