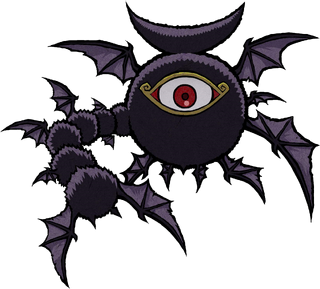 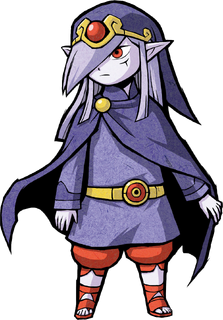 Vaati is a recurring Boss in The Legend of Zelda series.(FS | FSA | TMC)[9] Much like Ganondorf, he appears in both humanoid and monstrous forms, although the former only appears in The Minish Cap. In The Minish Cap, Vaati also takes on three other forms, including that of a Minish.

Vaati appears in Four Swords as a mage that kidnaps many beautiful maidens and brings them to his Palace in the sky.[10] At that moment, a hero wielding the legendary Four Sword appeared. Using the Sword, he split his body in four to defeat Vaati and seal him away inside the Four Sword in the Four Sword Sanctuary.

The seal on Vaati was apparently weakened over time, and in time Vaati managed to break out of his prison within the Four Sword. In order to commemorate his return, Vaati kidnapped Princess Zelda and took her to his Palace to become his bride.[11] After traveling over three different lands and the Dungeons they contained, the four Links confront Vaati in his Palace, the seat of his power. After an arduous battle, Link is able to reseal Vaati into the Four Sword.

Vaati has two forms in Four Swords. The first is Vaati possessing a statue of himself encased in armor, and the second is him appearing as he does in the opening cutscene.

Vaati appears in Four Swords Adventures, resurrected after Ganondorf tricks Link into drawing the Four Sword and releasing him. After cursing the Royal Jewel, Ganondorf used the darkness that Vaati spread to steal the Force Gems from Hyrule, empowering himself.

During his adventure to save Hyrule, Link finds evidence that Vaati is not his only enemy, and eventually learns that Ganondorf was behind the theft of the Trident and Dark Mirror, and thus the power behind Shadow Link.

Vaati's history is explored in The Minish Cap, revealing him to have once been a Minish that lived in the Minish Realm as Ezlo's apprentice.[7][13] Over time, Vaati became fascinated with the evil in the hearts of men and began to desire power.[14] He learned the legends of the Picori Blade and Light Force, two gifts that the Minish gave to the Humans. These gifts were used by the Hero of Men to seal away the evil terrorizing Hyrule. Vaati decided to go to Hyrule and look for the Light Force, a relic said to be the source of unlimited magical power.[15]

Since the portal between Hyrule and the Minish Realm was about to open, Ezlo created a gift for the Humans. He fashioned the Mage's Cap, a powerful magical cap that was able to grant the wishes of the one who wears it. Vaati put on the Cap without permission and transformed into a sorcerer.[16][17] In order to spite his master and show off his new power, Vaati Cursed Ezlo, turning him into a living cap.[18] Before leaving, Vaati revealed his plan to cross into the Human world through the Minish Door and obtain absolute power.[19]

Vaati learned that the Picori Blade was being used to seal Bound Chest, which he assumed contained the Light Force.[20] He decided to enter the Sword-Fighting Tournament in the Picori Festival, as the winner had the honor of touching the Blade.[21][22] As he approaches it, he blasts away the guards protecting it and breaks the Picori Blade, releasing all the evil contained in the Bound Chest. Princess Zelda is guarded by a mysterious power that Vaati recognizes, and he turns her to stone to prevent her from interfering with his plans.[23] To his surprise, the Bound Chest did not contain anything other than the monsters, but he vows to continue searching for the Light Force.[24]

To aid in his search, Vaati impersonates King Daltus and orders the Vassals of Hyrule to search for the Light Force.[25][26] Vaati learns that the location of the Light Force will be revealed if the Picori Blade is reforged and infused with the Four Elements,[27] and allows Link and Ezlo to continue their quest.[28][29] The two eventually unlock a hidden room in the Elemental Sanctuary containing stained glass that reveals the Light Force to have been residing within Princess Zelda all along.[30][31] Vaati thanks them before knocking Link out and teleporting to look for Princess Zelda.

By the time Link reaches Vaati, he has already managed to extract some of the Light Force from Princess Zelda and transforms into a tall sorcerer form called Vaati Reborn.[32] Link defeats this form with the power of the Four Sword, and Vaati transforms into a demonic one-eyed black orb called Vaati Transfigured. He is vanquished again, however, expressing disbelief that he could be bested by a child despite having the power of a god.[33] As a result of this defeat, Dark Hyrule Castle begins to collapse shortly after Princess Zelda is restored, forcing her and Link to escape to the Palace Courtyard.[34][35][36] In his anger, Vaati transforms yet again, this time into a larger, more powerful version of his second form called Vaati's Wrath.[37] He also prevents Link from accessing the Elemental Sanctuary, gloating about how he has become the master of the universe before warping him to another realm.[38] He is defeated again, however, and upon the final blow being dealt, he again expresses disbelief that he was defeated by Link despite his gaining part of the Light Force.[39] Princess Zelda uses the Mage's Cap to restore the damage Vaati had done,[40] destroying the Cap in the process.[41]

In the Four Swords manga by Akira Himekawa adaptation, Vaati mirrors his role from the game; however, when Link first splits into four, the demonic mage appears as a stone golem. After the golem's defeat, Vaati's essence escapes to the Tower of Winds. After the four Links are separated, he sends Big Poe to the Temple of Darkness to eliminate Red and Blue. Later on, he takes the guise of Princess Zelda, luring Link's father into his trap, seeing him as a possible way to kill Link. This plan is foiled by the Links and his father, who destroy the disguise. During the final battle, Vaati sends the Links into a surreal world which he commands, though he is ultimately defeated by the four Links and Shadow Link.

Vaati appears in the The Minish Cap manga by Akira Himekawa, reprising his role as the main antagonist of the story with his background remaining virtually unchanged, though there are some heavy differences that occur in the final battle. During his final fight with Link, he assumes a previously unseen form referring to himself as the Great Demon Vaati, in which he adorns new clothes and a helmet. He does not utilize this form for long, however, before becoming Vaati Reborn. Things go awry as he loses control of the Light Force while his body goes through an uncontrollable transformation into a form resembling Vaati's Wrath. He begs to be saved from himself, and Link uses the Four Sword to purify and redeem him; he shrinks back to his original Minish form, apologizing to everyone for the evil he had committed in his conquest for power.

In Super Smash Bros. Ultimate, Vaati appears as a Spirit with no ability.

Vaati's name is a reference to his mastery of wind. It resembles "vāta," a Sanskrit word for wind, air, and the god thereof.[42] It also bears resemblance to "venti," the Italian word for "winds." Vaati's Japanese name, "Gufū," means "tornado."

Vaati's English name may also be a reference to the Wind Dukes of Aaqa from Dungeons & Dragons, who are known as the Vaati, and live on the elemental plane of air and use wind magic.