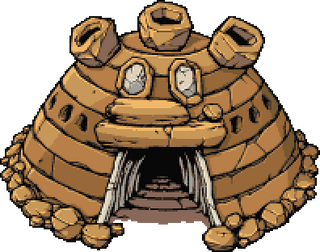 The Entrance to the Village

The Usotami Village is a location in Ripened Tingle's Balloon Trip of Love. It serves as home to the Usotami, striped people who have a strong tendency to lie.

This subterranean village is located in a desert in Page 11, the entrances to the village resembles a head of an Usotami made out of rocks. Stone tablets with riddles, and idols with smiling and angry faces can be seen on walls, as well as torches and lanterns hanging from the ceiling. The village is home to Liar, one of Tingle's love interests.

After completing the desert area, Tingle, Lion, and Buriki end up in the village while chasing Segāre, who has kidnapped Kakashi. To reach Kakashi, who is being held in a cave behind the village, Tingle must solve several puzzles, all of them involving lies.

At the end of the village resides the Usotami Chief in a room with a large herd of colorful goats. One of them is the required for Liar to milk it in order to obtain Milk, wich Tingle must give as an offering to the boss Big Liar to calm him down.