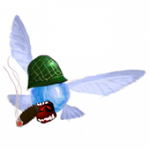 That's what I meant by perfect timing. The way you put it is that the enemies are just able to outright block it, as well as making it a bit long winded in your explaination. You can put it back, but just put something to the extent of "While it is unlikely, some enemies with Shields, such as the Darknut, can block the Mortal Draw."-- C2 / CC 15:31, June 21, 2010 (UTC)

A lot of users have been having difficulty getting on the IRC. I don't know why this is, and it may be the fault of Freenode, the server. I'm afraid I can't help you Naxy. If you can, try using a different client instead of the in-browser, such as mIRC, Colloquy, or as I use and highly reccomend, Chatzilla, since I can get on just fine. -Stars talk

It's an add-on for Firefox - simply google it to find it. Once your on, it'll give you a list of networks. Pick Freenode and once connected type /join #wikia-zelda, and bam, you're in. It's a very good client with tons of other features. It's also lots less laggy than the in-browser and much more reliable. Completely safe, no viruses or anything to worry about ^_~ -Stars talk

Link to what? -Stars talk

Redeadhunter has been having the same problems, and he managed to get on using this: http://webchat.freenode.net/ -Stars talk

Errant edits, such as these (just played that part of the game myself and cross-checked two-three YouTube videos), are of a considerable risk both to our encyclopedic integrity as well as your own, as a contributor. What is your source for the original contribution to begin with? Keep in mind that editing without firsthand knowledge of the game is frowned upon, and indeed, is plain and simply not recommended. Regardless of your explanation, you require absolute certainty in such matters in the future. --AuronKaizer! 22:47, August 27, 2011 (UTC)

Good to see you again! I haven't actually quite finished Skyward Sword yet (admittedly, since I haven't had all the time in the world to play it, I'm only about halfway through it). I can't say for sure how good I think it is right now, but it's shaping up to be one of my favorites in the series...possibly even my second-favorite after the great Majora's Mask, unless the game just tanks at the end (which I'm obviously not expecting, but it could happen). Fi is pretty amusing to me, since she talks like a computer program and even filters some of Link's ridiculous possible responses through whatever logic programming that was built into her. Like when a Kikwi shows up near the beginning of the game with strong dowsing readings for Zelda's aura, if you select the "Is it Zelda?" option, or whatever it was, Fi actually goes and lists every difference between the Kikwi and Zelda she can think of, concluding that there is only a 5% chance that the Kikwi is Zelda. That was one of the best laugh-out-loud moments in that game. That and when Zelda's all, "So...you know what happens next, right?" and she smiles a little, leans in close...then she flips you around and pushes you off the statue. XD I can hear Aonuma now..."The moment all you Zelink fanboys and fangirls have been waiting for...NOT!" And I'm absolutely loving the gameplay, too -- the combat, dungeons, and everything in between is really well-executed. This is getting a bit long-winded, so I'll keep this from being too massive a wall of text and finish this up. Good day (or night) to you! Jedimasterlink (talk) 02:19, January 4, 2012 (UTC)

Hi. I'm reloading my primary computer right now and will be busy with other things most of tomorrow, but I'm not advancing in SS right now either. So it may not be for a little while, but I can certainly talk to you live before I do any more SS and potentially end my ability to get a pic of whatever it is. I'm just past the 6th main dungeon. Also, I don't have a direct Wii to computer connection, so unfortunately any pic I give you will likely have to be a digital camera pic of a TV screen. I'll talk to you more in a little while.--FierceDeku 05:21, January 16, 2012 (UTC)

Huh...that's pretty interesting. I think that was intentional on the part of the developers. Interesting that they programmed it so that Link takes damage based on his angle, and not just the height from which he falls...

Yeah, it seems like the whole of Termina is on the verge of some kind of industrial revolution. I never noticed the Pirates' Fortress thing before, but it certainly fits with the rest of the world. How detailed is this map supposed to be?

Companions...well, Midna is obviously the best. Tatl probably takes second. I'm not really sure about the others, though. None of the others made much of an impression on me as characters, though the PH fairies get extra points for being useful.

I thought SS was incredible; I rank it as my second favorite in the series after MM. The controls, while not perfect, were more polished than I expected them to be, and the story is the best I've seen since MM. In fact, I'd say SS's story had better pacing and writing, but MM beats it on emotional impact and thematic depth, which is why I still think it's the best. It's pretty close, though. I'd give a full review, but I'm saving that for, you know, my reviews page, since I'm still sorting out my thoughts on some of the less important categories. Jedimasterlink (talk) 01:11, February 3, 2012 (UTC)

I found out that it takes one hit from any type of arrow to defeat a red tektite but it takes two arrows to defeat a blue tektite except for ice arrows which defeats them in one hit and both are immune to dins fire. All of this info comes from the 3ds remake of Oot. Is anything different than what you found out? Green Rupee (talk) 19:38, June 1, 2012 (UTC)

Retrieved from "https://zelda.fandom.com/wiki/User_talk:Naxios10?oldid=420505"
Community content is available under CC-BY-SA unless otherwise noted.