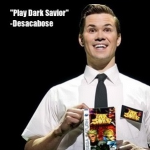 We already had a discussion on the supposed existence of an Adult Link Mask during development, but the general consensus was that the images supported the existence of a mask resembling Adult Link but we had no conclusive evidence about whether or not it was actually an Adult Link mask (given that you can use all of the Adult Link items as a child in MM, there doesn't seem to be much of a point), or if it would actually transform you, or if the Fierce Deity Mask actually replaced it, etc. If you have an actual source for a developer comment involving the Adult Link mask, as you seem to imply you do, I suggest you post it in that discussion. Otherwise, we don't have enough proof to know the Adult Link mask actually existed in the same capacity as the Fierce Deity Mask. Xykeb Yvolix Zraliv 21:32, April 12, 2012 (UTC)

Your blogs are pointless and serve no purpose on this wiki. You're talking to someone who doesn't even edit here. Please cease your blog creation, well, at least blog creation of this sort. --Jazzi 17:16, April 21, 2012 (UTC)

Your account edited your and Jazzi's comments above. Whatever the case may be, don't let it happen again. If it was somebody else using your account to do so, please try your best to make sure that person doesn't keep doing it. Even if it wasn't you, your account is your responsibility. Xykeb Yvolix Zraliv 19:54, April 27, 2012 (UTC)

Your view on admins is...disturbing, to say the least. I suppose the most distressing thing about it is that you seem to suggest that one should submit to everything an admin says, just because they always get their way, which is a deplorable way to look at things. If you disagree with an admin, say so. They may continue to disagree with you, but that could happen with any user. Keep in mind that admins are promoted due to their editing and decision-making abilities, so the impression of "pushing around" newer users tends to just be them having more experience and therefore being able to accurately tell newer users that they think they're wrong. If other users agree with the admins and the proposition of a newer user continues to be argued against, it probably really is that newer user that is in the wrong, and not the admins just getting their way because they're admins. Xykeb Yvolix Zraliv 19:30, April 27, 2012 (UTC)

Say I try to make a new page for something that is real but an admin decides that it is unnecessary(lets say I tried to make a page about zelda or shiek) because of his/her personal views.I'm a normal user they are admins.sure I could try to make it again but, the admin being admin, simply deletes it and simply deletes the page and bans/blocks me.How could I have done anything to prevent them from getting their way?I couldn't for the simple reason they are adminsDesacabose (talk) 19:40, April 27, 2012 (UTC)

You discuss it, just like with everything else. Look at it from the admins' point of view. By making it, then trying to make it again, you are openly defying the authorities, and also insinuating that you know best for the wiki, despite your lack of experience or knowledge of the wiki's policies. More to the point, most admins don't delete pages because of their personal views, but because the article simply isn't proper for the wiki. Newer users don't seem to realize that. Including, apparently, you. Xykeb Yvolix Zraliv 19:47, April 27, 2012 (UTC)

Most admins don't delete pages out of personal views but large amounts do just for it differing from what they believe is right meaning that, to have it right in your eyes and really to be fair, before any single item is added or deleted we must have every single person vote on said subject which is nigh immpossible so here comes admins who are meant to be the deciding line ergo they are the rule and cannot be swayed if they feel strong enough and they know what they say ultimatly goes.Desacabose (talk) 20:32, April 27, 2012 (UTC)

You're missing the point here. Admins exist because without them wikis would have absolutely no form of governing body and nothing would get done. We'll delete or remove things as we see necessary because we've been granted the rights due to our experience. As Xykeb said, because of our experience we are sometimes a better judge of what should and shouldn't go on the wiki...and the same goes for experienced non-admin users. If you add something and someone removes it, no matter who they are, don't add it back-- that's getting into an edit war and is unproductive. If it's an admin (or even if it isn't) just go ahead and contact the person as to why they removed it. The other thing is that no one admin holds ultimate power; if another disagrees a discussion will be held and a decision will be made. If all the admins thought something was a good idea but every other user disagreed, we wouldn't go and then do it anyway, again, we'd have a discussion as a community and make a decision. We are the deciding line and what we say does ultimately go, but if you have a point that you genuinely believe to be right just discuss it with the admin to try and get your desired outcome. In the end, though, we do no more about editing than the average user and we absolutely have more experience than new users, so we are just better at deciding what detracts from encyclopedic integrity. From what I've seen this springs from me or someone removing your theory. What you have to remember is Zeldapedia is not a site for just putting any theory on the mainspace; theories that are genuinely plausible and supported by fact, as well as usually by a large number of people, are added. Sorry if I'm rambling here but you make us out to be this group of corrupt people who are out to do nothing but serve our own needs which is not the case. -Minish Link 20:58, April 27, 2012 (UTC)

Eh...oh...I \'m really not mad about that or anything I realize that I don't provide many references but I do provide them, I supported the removal of all the theories that had none way back when but that isn't the point you and ak and all the other admins on this wiki have a fairly clear grasp on whats acceptable.What I consider corrupt is... wiki based corruption:Admins having complete dominance over everything(which doesn't inherently flow through here) I don't think admins are insane or corrupt but I think the system could have a bit more leanency on no adminsDesacabose (talk) 21:08, April 27, 2012 (UTC)

I guess the thing is that admin corruption is situational. There most certainly are wikis out there where the admins are all-powerful and unfair, and that's wrong. But adminship, in and of itself, does not need to carry that connotation. What I found disturbing about your viewpoint is your implication that admins were primarily a unit of corrupt bureaucracy, and the good admins were the exceptions, which isn't necessarily the case. Xykeb Yvolix Zraliv 22:49, April 27, 2012 (UTC)

Retrieved from "https://zelda.fandom.com/wiki/User_talk:Desacabose?oldid=417052"
Community content is available under CC-BY-SA unless otherwise noted.