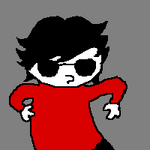 Sigs aren't usually made with templates. You can out that coding into the spot in my preferences so that will become the sig you use when you sign with ~~~~ Oni Dark Link 12:25, February 25, 2011 (UTC)

Well when you sign with three tides it doesn't give the time stamp. But people generally do like to see things time stamped I believe Oni Dark Link

Could you try to make it less flashy? Because it's kinda neausiating, and gives me, and possibly other users, a headache. --BassJapas 16:55, February 25, 2011 (UTC)

It's just alternating colours, it's not even that fast, only about 7 cycles a second I think. I'll leave it out for your just this once I suppose. User:ChainsawMurderer53

Could you kindly change it so it does not alternate as fast. It is pretty cool, yes, but also annoying so doing this would be greatly appreciated by myself and others. Thanks.-- C2 / CC 23:09, February 25, 2011 (UTC)

Not knowing how to work a word bubble just looks stupid too. If you must be this irksome about changing something that is causing users trouble (and considering the facts my vision is going to the tubes as we speak) then the only "problem" is you being rude about it. And swearing when it's not necessary, or accepted on this site. As well as the fact it could've been coding into a signature... --BassJapas 23:36, February 25, 2011 (UTC)

HA HA! I think the pic you posted in the pictures is hilarious (in a good way)!!!

Two things: Firstly, please don't upload images from Zeldawiki.org. Secondly, where (other than ZW, who I guess has a page on him) did you get the source for the name "Bucha"? Thanks. -Minish Link 00:59, October 23, 2011 (UTC)

I got the name from g4 and gamespot, both had hands on experience with the game and both give the name Bucha. I wasn't sure if I should cite sources in the article itself. As for the pictures, that's noted. -ChainsawMurderer53 11:00, October 23, 2011 (UTC)

Hello I'm one of the newest users Bongo Bongo the Shadow do you think you could help me?

Retrieved from "https://zelda.fandom.com/wiki/User_talk:ChainsawMurderer53?oldid=385566"
Community content is available under CC-BY-SA unless otherwise noted.