Hi there, just wanted to get your thoughts on a few points since the new-fangled Help Guide is your project ;)
As you know, for a long time Help:Editing was our only real help page, and a stopgap until we got something better (like now!) Clearly it's almost redundant now, hence it not being linked from the Help template, but I was wondering what should be done with it? It still has some information not covered in other sections (although I haven't read it all, so I can't say exactly what.) Based on that, I'm not sure if it should just be cut down and simplified, or broken up into sections and incorporated into the main guide, or just deleted!
Also, we still have Help:Changing featured content, which I wrote a while back when I was the only one with all the steps in my head! Despite the fact that the process has changed with the new Featured rotation templates, there's still stuff in there related to the actual administrative task of shifting and reformatting text from the voting page to the archive etc. I was wondering if maybe we should take that and incorporate it into another help page all about Featured content (voting procedures and rules, administrative stuff like this, disqualification and related procedures, replacement of existing images etc...) —Adam [ talk ] 08:35, 4 January 2009 (UTC)

Righto, hmm...
Pretty much the only content covered on Help:Editing that isn't covered elsewhere is the __NOEDITSECTION__ code and variables such as NUMBEROFARTICLES. So really I'm not sure that it could co-exist with the guide on its own with so little content; a merging with one of the current help guide pages would make more sense to me. Probably Help:Getting Started or something.
As for Help:Changing featured content, your idea of a Featured Content page explaining what it all is, voting rules, and all of that other stuff sounds like a great idea. I'm not sure why I didn't think of it myself! :P I say we do that. —Ando (talk) 14:13, 5 January 2009 (UTC)

I've merged a few bits of useful stuff from Help:Editing into Help:Getting Started, and removed what seemed unnecessary. I'll find a home for what's left soon. I think I'll leave the writing of Help:Featured Content to you, since you're clearly better at this stuff! You're good at simplifying, whereas I go into too much detail and end up making it more complicated :/ —Adam [ talk ] 20:38, 5 January 2009 (UTC)

Heh, I clicked to edit Help:Getting Started anyway to fix a couple of issues I'd missed before and just happened to get this message. But yes! You seem to have merged all of the good stuff (and some of the stuff I forgot about entirely >_>). I'll work on touching it up as much as I can.
Also, thanks. :D Yeah, I'll do the Help:Featured Content page. —Ando (talk) 20:46, 5 January 2009 (UTC)

At first glance, perhaps! But it is, in fact, not a template -- you may notice a new section under the toolbox on the left sidebar on every page that uses this coding. "In other languages: Deutsch". Just like on Wikipedia! :O
Adding [[de:name of the german version of the article]] automatically adds this section and the link. It's awesome! —Ando (talk) 21:00, 10 January 2009 (UTC)

Hi there, i went to check on the page Beaver falls race and was quite suprised to find that the edit i made was gone, so i checked it out and found out you'd deleted it due to the fact that there was no proof which i have no problem with as your an admin, thats your jod for all you know that could be utter jibberish, anyway i went searching and was able to find proof such as: 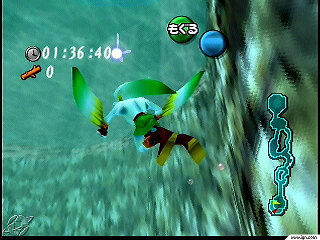 "Originally while racing the Beavers you also had to collect sticks to help build their dam. "At Spaceworld '99, the Zora power was demonstrated during an interesting race of sorts where Link tries to keep up with two beavers and help them gather drift wood for their dam".

From what I gathered, that was a glitch. If I'm not mistaken, on the page you edited, you stated it as fact. Mandi Talk

I Personally have beat the game several times. I believe Ando has aswell. No one remembers such an event taking place. That was why the edit was erased. Which, if that was indeed a glitch, that would explain a few things. But, I'll shut up :PMandi Talk

Ah, really? I'll be honest, I'd never seen that before! But with this information you've provided me, I'm now completely fine with this being on the page (with, perhaps, a little more info to clarify that it is indeed a fact; something like referencing that page you linked to).
Also, Mandi, this is a little different from a glitch; it's actually the beta version of the race -- the way the race was ORIGINALLY supposed to be before it was changed some time during the game's development. Sort of like how there are screenshots of an older build of Ocarina of Time showing the Forest Medallion as a usable item. It was originally planned for it to be like that, but they changed that before the game's release. —Ando (talk) 18:39, 11 January 2009 (UTC)

Hey... Sorry to bother you but if I'm not mistaken, you are at least a moderator of this site, are you not? Do you think an Equipment category for items earned from dungeons or similar exploits would be an acceptable article? I'm just thinking it would make it easier to find that stuff... With respect and humility, Alliram. 00:45, 30 January 2009 (UTC)

Hey there! Do you mean something like this? That page isn't really linked to enough so most people don't know that it exists... :P Also, all of those items are already in Category:Items, which lists everything alphbetically instead of by game and dungeon like the other list does. Or do you mean some other sort of format entirely? —Ando (talk) 03:39, 30 January 2009 (UTC)
Also, as a sub-note, I'm not an overly-active admin anymore, so if you'd like to better guarantee a quick response, Matt or Adam or really any one of our more active members would likely be a better source of getting-an-answer-fast than I. ;)

Hello there. Sorry to trouble you, but Ganondorfdude11 continuously tries to remove the theory section of the Great Cataclysm page b/c it doesn't conform to his own personal views. I am writing to request intervention to keep him from removing the theory section and all evidence it presents. Link87 04:19, 5 June 2009 (UTC)