An editor and admin of Zelda Wiki

Hi I'm new around here and I since your an admin I'd like to ask you a question. You see... in Skyward Sword there is this bird that flys around the entrance to the forest area in Skyward sword. Whenever it gets killed it drops 20 Rupees. Do you know what this bird enemy is because I think it's a Takkuri? --Nathbuds123 12:51, 26 January 2012 (EST)

I noticed you have a Fi Artwork 2.png separate element of Fi from the Skyward Sword E3 2009 Poster.

Did you make it yourself (no logo is covering the legs) or did the original press released image contain layers? I'm looking for that E3 2009 image without the logo (I know it's Legend of Zelda, and it distracts from the beautiful drawing ;-) for my bedroom decorations. Can you share the original layered full-res image?

Sorry, but Fi was rendered off a single-layered image. For the parts that were covered by the logo, I played with the clone tool and lighting, and finally got something satisfactory. I know that a version exists without the logo (check Hyrule Historia), but I've only seen tiny thumbnails of it. If you do find a multi-layered image, though, please upload the clean image. Stupid logo ruins the picture. — Abdullah [T] [C] [S]  13:09, 27 January 2012 (EST)

RE: Skull Kid's need of improvements

Do you think it's a good idea that I turn Skull Kid's article into a mixed article (both character and species) that talks more about both the character and his species origin? I think it'll be better like that.--Prince Ludwig 13:59, 25 February 2012 (EST)

Just a couple quick questions about this image from the Gate of Time page: 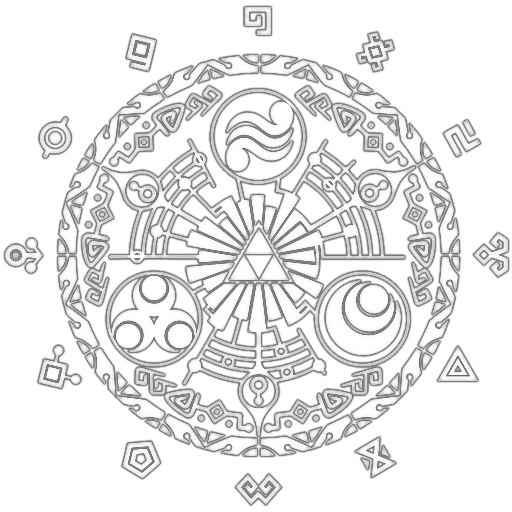 Is it a direct rip from the game, or did someone re-draw it? And if it was re-drawn, is it public domain? And if it's not public domain, who do I need to get in contact with about getting permission to use it? :)

It was ripped, then made transparent. I also added a black glow to make it visible on light backgrounds. It's not the best job in the world, but it's better than having it on a solid black background. So basically, it's a modified version of copyright content. Not sure how that works. — Abdullah [T] [C] [S]  02:35, 29 February 2012 (EST)

Alright, thanks. I've got a Gate of Time live wallpaper up on the Android Marketplace (100% free) and that texture would have looked great on it, but I guess I'll just have to bug my graphic designer friend some more to finish the one I'm using. I just don't want to risk any potential copyright issues.

Previewing, then adding ~~~~ triggered. Nothing happened when they were added before previewing. Will a NIWA link do the same?

3 minutes after the account was made, Williefinch created a page advertising some Facebook marketing thing. This makes it clear that the only purpose of that account is to advertise. According to our policy, spamming ("Inserting links to external sites for the purpose of advertisement") is a bannable offense. Hope that clarifies things. — Abdullah [T] [C] [S]  20:38, 14 July 2012 (EDT)

Hi there, I just saw your image from the Dog page http://www.zeldawiki.org/images/8/87/TP Link Holding Dog.png and I have to tell you that I really like the image of Link. I'm asking myself if you could upload another image just only of Link standing alone (since we don't have any 3D model of TP Link, without counting the SSBB one). That would be cool, what do you say? :) --Isamisa 19:58, 5 August 2012 (EDT)

After examining the changes you made to the Weapon Strength, it seemed to me that the system could be somewhat confusing. For values that are halved, the symbol used is a smaller square. I was at first doubtful that I was reading it correctly. If it was able to throw me off, however briefly, I am sure it would do so with more than one person. My suggestion is that you cut one of the squares in half, from corner to corner. —Preceding unsigned comment added by Kyro-Dizzy 03:37, August 13, 2012

Can someone help me..ive reached the castle as adult link.and cant get past the orange door.i have somehow managed to replace my bombshu's with an empty bottle.i buy more an they dont show up ob my page.is there any way i can delete or replace the empty bottle with a bombshu?or is there any other way past the orange door without a bombshu?Aledfoel 13:34, 26 October 2012 (UTC)aled

It looks like you did the Bottle Duplication glitch. Unfortunately, it is permanent. Even more unfortunate is the fact that you can't get past that part normally. You either have to resort to glitches and cheats, or reset the game entirely. — Abdullah [T] [C] [S]  09:52, 27 October 2012 (UTC)

Hey, so Mandi brought up a good point here about our Featured Article and Image voting systems. I personally would like to see a change, but that just won't happen if no one says anything or voices their opinion. I'm asking you to please voice your opinion on changing the system so we can move forwards with proposing actual changes and actually GET somewhere with this. Please and thank you!—Justin(Talk) 20:38, 6 December 2012 (UTC)

Thank you for finishing the Wind Waker items template for me. I was going to finish it today, but it looks like I don't have to anymore. As you have suggested on my user talk page, I will upload menu images for Twilight Princess and other games to make item templates. wwtoonlinkfan 22:08, 12 December 2012 (UTC)

The featured content voting system has been reformed! =D
With this reform...we have an image which meets the criteria for featured status. I was going to do all the necessary work, but there were a couple protected pages and Dany wouldn't unprotect them because she was being lazy, so I'm asking you to do the necessary steps to feature this image. If I was on a computer still, I'd just ask you to unprotect the necessary pages, but I'm back on my Xbox and lack the copypasta ability.—Justin(Talk) 05:42, 13 December 2012 (UTC)

Everytime our "resident troll" shows up it was proceeded by numerous User Creation logs of users with names like 6ed83 or stuff like that. I'm starting to think thats theres a way to force open the back door by numerous user account being attempted to be created.--Shadow Reaper 15:08, 4 February 2013 (UTC)

There's probably no connection between those random-name accounts and "Junior's" accounts. He can easily create an account without doing anything like this, just by spoofing his IP. Just gotta hope that he'll grow up and spend his time on something a little more productive. — Abdullah [T] [C] [S]  15:26, 4 February 2013 (UTC)

My overhaul made the article a lot more valid and informative than what it was (there's a giant discussion about crap like Harry Potter not-really-allusions or whatever), and a large part of what I've added is in line with pretty much any other article. Yes, the concept discussed in that paragraph really does require a paragraph; yes, it's a much better use of the Trivia section than stuff that should probably be better off in the main body, or stuff that shouldn't be in any article for any reason. ZeldaDoritos (talk) 17:27, 18 November 2013 (UTC)

The issue it seems is that you take offense when there isn't any, and how you express your anger
there's a giant discussion about crap like Harry Potter not-really-allusions or whatever
While I agree that talk about Harry Potter probably isn't appropriate on this wiki, your vocal expression of your frustration just adds to the problem. If you have any issues in the future, try to be more civil. Champion of Nayru (talk) 22:00, 18 November 2013 (UTC) Champion of Nayru

I forgot to tell you

Josh is working on a new main page design. I haven't heard from you, so I didn't ask you if you'd like to participate. You should get on Slack sometime and I'll get you two in contact. He could use some help on it :P—Justin(Talk) 11:20, 29 July 2014 (UTC)