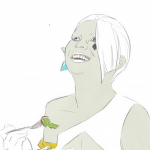 When a page is already tagged for deletion, don't tag it again. —Preceding unsigned comment added by Jäzzi (talk • contribs)

Please cool down with the caps, especially on talk pages for headings. Additionally, if an IP is going to be blocked, which it very obviously is going to be, please alert any of the admins and they will get to it. In the meantime, just revert and ignore. – Jazzi (talk) 18:44, July 7, 2012 (UTC)

Just go to the history section and click undo. Or, in the case when there's someone who has rollback who's only, leave it to them as it'd be easier than fumbling about and possibly edit conflicting others. So yeah, just undo and ignore. – Jazzi (talk) 18:48, July 7, 2012 (UTC)

Hey! Just want to let you know that when you add an image to a page like you did, it should follow this format the hover text being the caption in the infobox. Additionally, we don't have punctuation except for commas in the captions. And if you can, it'd be nice if you'd provide the licensing for the file you uploaded. Thanks, – Jazzi (talk) 18:13, July 9, 2012 (UTC)

Not to sound rude or anything, but when I leave a message to a user, I either expect a proper response, or for them to ignore it, if you've nothing to say but "Cheers." then I'd appreciate it more if you didn't respond. I'm trying to help you out, if you don't want it, you can say it right out and I'll stop trying to help. – Jazzi (talk) 18:23, July 9, 2012 (UTC)

So I edited your page earlier, but Jäzzi said to ask you first. So basically these <br> are being replaced per this forum. I was wondering if I could fix them for you? Green Rupee 20:20, July 29, 2012 (UTC)

Could you provide a source for the info about the Arwing being used to map out Volvagia's movements? While we don't normally use sources, we use them for these sorts of real-world things since the information could be more easily questioned. Jedimasterlink (talk) 07:26, August 5, 2012 (UTC)

Oh. This'll probably sound rather informal, but 'Did you know gaming'. Most of the sources it uses are official, there was a meeting, the complexity of boss behavior was brought up, and the info was revealed. AWWW YEA! (talk) 10:52, August 5, 2012 (UTC)

For future reference, when a source is asked for, provide the link to that exact page, preferably in the edit summary when you make the edit. Making people go through unnecessary legwork isn't gonna endear you to anyone. --AuronKaizer! 12:31, August 5, 2012 (UTC)

Retrieved from "https://zelda.fandom.com/wiki/User_talk:AWWW_YEA!?oldid=436920"
Community content is available under CC-BY-SA unless otherwise noted.