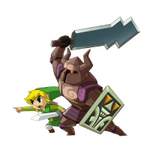 Check out my special Zelda blog at The Hyrule Blogger

Okay, my page has gone through a lot of changing but I think I'm happy with it now. Here's a little bit about me.

The seat in front of my Apple Mac

Master of the Wii Remote, High Lord of My Bedroom, Hero of the Twilight

Two years ago, I thought the famous Green-clad hero was called Zelda and Luigi wore a red hat. Skip back to the present time and I'm a very different 12 year old boy.On the Christmas of 2008 I recieved a Nintendo Wii. I immediately became a Mario Kart Expert and was able to compete with my friends. But my Nintendo DS Lite(received a year later) was the console that introduced me to the wonderful world of Zelda. Spirit Tracks was a moving title for me. I almost cried when I saw the final cut scene. I recently completed it and I have begun my Phantom Hourglass adventure as I type. Well that's something to chew on... I'll be back with more infomation on Zeldafan777. Please comment on what you think so far. Thank You!

Ok, You can talk to me lots of way. Pick your favourite.

Useless info about me that's essential to know

Not very interesting stuff to do when I'm bored

Mario and Sonic at the Winter Olympic Games

Mario and Sonic at the Olympic Games

Retrieved from "https://zelda.fandom.com/wiki/User:Zeldafan777?oldid=448692"
Community content is available under CC-BY-SA unless otherwise noted.