My name is Michael Reyes, 23 Years old and I am a Character Artist. I am a Major Zelda Fan mostly in it for the wonderful details of Zelda's Timelines. My first Zelda game was the Legend of Zelda Wind Waker for the Gamecube. At first the gameplay and fun is what got me interested until the Story was catching on to my interest. Since then, I've been a Big Zelda major and have been looking forward to new Zelda games. Since Twilight Princess came out for the Gamecube, I got more hooked into it and I'm glad. So now here I am as a member of the Zelda Wiki, wanting to do my best to do my part for this site and filling whatever blanks of information that is needed and I always hope that it's appreciated. Thanks for Reading. Please enjoy my OCs' (Original Characters') Stories and tales.

Wolfger is a toned anthropomorphic Tigerwolf Hybrid who is a Master Swordsman with a Giant two-handed Blade. Through out his life, Wolfger has been on the search to who or what has killed and destroyed his family and home. During his quest, he encounters a group of friends who are willing to aid him. An Eagle named Chad, a Timberwolf named Yaske, a young Tigress Yune, a Brown wolf named Ryo and lastly a lovely Snow-white Wolf named Whitney. Together, they ventured throughout the lands of Narashi, soon to discover they were chosen guardians from the heavens that can help bring balance back into the Land, as the Elemental Archangels. Wolfger is the chosen Archangel of Shadows, powers to balance the Good and Evil within the Darkness, by being it's Good. 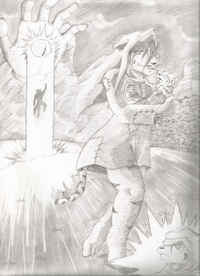 His real Werewolf father mated with an elegant tigress during one Mating season until he lift her, being scared with the idea of raising cubs. Soon as he disappeared, the tigress moved on and fell in love with another wolf who was feral but brave and strong. They quickly mated so that once she gave birth, all of the cubs would come out with her first child in a litter. After a month, the tigress gave birth to one special pup with tiger stripes and the mark of the werewolf fang near his eyes. The parents were so proud. They called the Hybrid pup, Wolfger.

Soon after a good week, all the cubs were learning to open their eyes, including little Wolfger. Excited to see what the world looks like. However the soon as he opened his eyes to see the smiles of parents, he also saw a huge storm of darkness was rolling in. Out of the draw clouds, a giant dark hand with a huge crystal eye in the palm emerged out of the storm and began attacking the land. His wolf stepfather stood his ground and ordered his wife to take their son as far as she can. The Tigress cried as she picked up her son and ran with him, only hear the screams of pain and death behind her.

She knew it was coming closer to her. She didn't know what else to do as she came up to a huge ocean of water. The Tigress pant and thinks quickly as she saw a boat. She ran towards it and placed her baby in it. Nuzzling little Wolfger good bye as she send him off before the monstrous hand was coming for her. She ran away to distract the monster away. Leaving her crying child drift.

Soon after what seem like hours, the boat stopped at a shore of the beach. Little Wolfger whimpered as he see he was alone. Feeling hungry and alone, as soon as he was about to let out another cry, he heard a sweet sound of music coming from what appears to be from a flute. Up above in a tree, a Fat old Tanuki was playing it, playing an enchanting music that calm down little Wolfger. The pup sniffles and looked up at him with tears in his eyes and reaching to suck his thumb. The Tanuki can already see the young pup was no feral but anthro like him. Without question, the old Tanuki took the pup under his care and raised him as he was his own, training him to be a Marshal arts fighter as well as he was, in hand to hand Karate, Archery and Swordsmanship.

Whitney is an anthropomorphic white snow wolf who is a master skilled gunner. She was born in a village that was filled with life and peace until an evil darkness that was similar to the one that destroyed Wolfger's home and family, destroyed the village completely into ruins. Only few villagers survived along with her. A group of soon-to-be gang members of bandits found her and raised her to one of them, mostly in order for her to survive on her own. She became a quick learner in gunslinging.

Once on her weekly runs of hunting for people to rob, she encountered Wolfger, Yune and Yune's sister Ashley. In attempt to rob them, a huge anaconda appeared and interrupted her. Even tho Wolfger and the others wanted to leave her to her doom, Wolfger unselfishly leaped into action and saved Whitney. After, Whitney stays with the group for a bit to clean up from the anaconda guts. Slowly getting to know them and have a sudden interest in Wolfger. Since then Whitney turned her back to her fellow bandits and decided to travel with him. Soon to realized she was one of the chosen Elemental Archangel of Light.

Ryo is an anthropomorphic Brown Timber Wolf who is a very skilled HeavyWeapons Warrior. Ryo is actually one of the Princes of the Narashi Kingdom, future ruler of the Kingdom when his time come and looking after his younger brother Yaske. Their parents had left Ryo in charge as they went to mission of their own. As the oldest, he was next in line for the throne, training with all the studies to be a great and caring King as well as learning how to fight for his Kingdom as well. He had picked to use heavy two handed weapons such as Board Swords and Battle Axes for pleasure of heavy hitting and Slow and steady.

After visited by Wolfger and his group, Ryo had quickly recognized Whitney as one of the bandits from the Village Ruins. Without listening to reason, Ryo immediately arrested Wolfger and Whitney, sending him into the castle dungeon and sentencing Whitney to execution, to beheaded. However before the execution was about to commence, a familiar darkness had appeared and engulf the Kingdom of Narashi in it's dark clouds. Ryo noticed this and knew what it was. He knew this darkness had been causing chaos all over the lands and had come to do the same to his Kingdom. He needed to contain this evil to buy time as he send out his younger brother Yaske out in search for the Archangels reborn. Using the elemental crystal he had since he was a child, he had channeled in all his power to crate a massive Barrier to contain the darkness, trapping it inside the minute Yaske escaped the kingdom with Wolfger, Whitney and Yune. Once the barrier was down, Ryo discovered he was one of the chosen Elemental Archangels of Earth.

Yune is an anthropomorphic young Tigress who is training to fight with Daggers and Knifes. Yune was a young nervous little girl who lived with her sister Ashley who is a Blue Tigress and is a beginning spellcaster of winds. Their parents had passed away a long time ago, leaving Yune in Ashley's care but struggling for a living in a small village which was one of the most strongest marketing places and do their best not to resort to stealing food.

When Yune's sister was arrested by the royal guards of the village for framed crime, Yune was alone for a while until she met up with Wolfger. Witnessing Wolfger's skill after he had stopped a bandit from stealing money from a vendor. She had begged Wolfger to help her save her sister from a towering prison. Neglecting the wrong doing of helping someone break out of prison, the thought of Yune perishing with the lack of family to help her touched him hard. So he helped Yune free Ashley from prison. Within doing so, Wolfger, Yune and Ashley had to become outcasts from the village and they would have to find new homes. However Yune wished to travel around the land with Wolfger to learn his skills. With Ashley tagging along, promising to take responsibly for Yune for Wolfger, he accepted the company. Later discovering that Yune is one of the chosen Element Archangels of Water.

Yaske is an anthropomorphic Timber gray Wolf who has a great skill in snowboarding and fencing. Yaske is the younger brother of Ryo and one of the princes in the Narashi Kingdom. He was always a spontaneous and fun having young wolf but his studies to be the future ruler has been getting in his way of having fun. Even tho he always looked up to his brother, he always wanted to handle things his way. He can be very uncomfortable or for instance, shy around girls even tho Yune's Older sister has a crush on him, despite the age difference.

After the darkness has engulfed Narashi Kingdom and Castle, his older brother sent Yaske away to find the six elemental Archangels for help. Soon as he managed to escape the kingdom before a massive barrier appeared all around the kingdom to contain the darkness, Yaske meet up with Wolfger, Whitney and Yune. Not knowing what to do all by themselves, they had join forces and set out on a journey together to find the Archangels' aid. Soon to discover that they were the Archangels reborn, making Yaske the Archangel of Winds. Having a Wind elemental made the crush on Yaske from Ashley even worse.

Chad is an anthropomorphic gryphon which is a lion and eagle hybrid, who has a great professional skill in Archery. Chad is actually a prince to the hot land's kingdom which was a home for both lizard, raptors and Eagles. The Eagles would roost and nest on the high points of the mountains around the biggest volcano while the reptiles would live on the ground and inside the caverns of the Volcano. Between inside and outside was a huge castle which houses the rulers of the Hotlands. It use to be Chad's father as a Bald and noble Eagle as King and from the outside was a lioness for his mother who had died upon giving birth.

Desperate, his father had married a female Raptor for a Queen, who truly seeks out for the kingdom all to herself. Chad was almost treated like an outcast from his own home in the castle, so he stayed within the village until he met up with Wolfger and his group. After hearing about Chad's problem, Wolfger and the others wanted to help prove that his stepmother is a Gold-digging liar. To first prove that Chad would be more fit to rule the kingdom, he and his newly found friends must go through the trials of the Volcano Dungeon and reclaim the elemental Stone of Pyro. However, by the time they got back, they had found out that the Usurper Queen had murdered the King and she toss the full blame on Chad and the others. With having no choice, they had to flee from the kingdom, cast away in exile. Chad vow that he will return and reclaim his kingdom when he becomes stronger. During his quest to become stronger, he soon discover he was one of the chosen Elemental Archangels Reborn, becoming the Archangel of Fire.

30px Zelda Games I Have Played