Zelda Wiki
Register
Don't have an account?
Sign In
Advertisement
in: Pages with reference errors, Characters in Ocarina of Time, Characters in Majora's Mask,
and 5 more 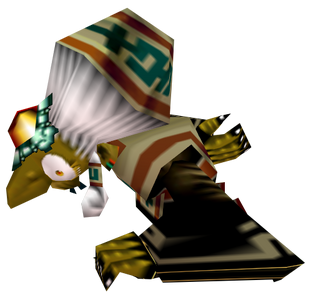 Kotake (sister)[2]
Ganondorf (surrogate son)[1]
Koume is a recurring character in The Legend of Zelda series.

Koume, along with her sister, Kotake, are twin Gerudo witches who possess fire and ice powers, respectively. Koume and Kotake collectively have the power to combine to form Twinrova, a witch with both fire and ice powers. Because of her fire-based powers, Koume is weak to Kotake's ice powers, a property that is transferred to Twinrova upon their fusion.[1]

Together, Koume and Kotake acted as surrogate mothers for Ganondorf,[2] raising him to be evil in the hopes of fostering his role as the Demon King, Ganon.[3] Koume and Kotake operated in secret, using the Spirit Temple as a hideout.[4] Nabooru learned of this and attempted to enter the Spirit Temple to steal their treasure and potentially thwart their plans. Because of the small passages in the Spirit Temple, Nabooru is unable to navigate it and so enlists Link's aid to steal the Silver Gauntlets from within. However, as Link retrieves the Gauntlets, Koume and Kotake discover Nabooru and capture her with the intent of brainwashing her with their black magic.[9][10]

When Link enters the Spirit Temple's boss chamber, Koume and Kotake mock him, claiming that he is there to offer himself as a sacrifice for Ganondorf.[22] Prior to their fight with Link, Koume swears to burn Link to the bone.[23] After Link deals enough damage to the duo, Koume tells her sister that it is time to get serious,[24] prompting them to launch their Double Dynamite Attack, fusing into Twinrova.[25]

When Link defeats Twinrova, Koume and Kotake separate, resolving to come at Link more seriously.[26] However, Kotake notices a halo floating above Koume's head, leading to an argument between the two as they both float toward the sky.[9] Before they disappear completely, Koume and Kotake threaten to return and haunt Link from beyond the grave.[39]

Koume is the Terminan counterpart of the Koume from Hyrule in Majora's Mask. Koume resides in the Southern Swamp with her sister, Kotake. At some point prior to Link's arrival, Koume was attacked by the Skull Kid while she was picking Mushrooms in the Woods of Mystery. She was left there, injured and unable to return home. Upon seeing Link inside the Woods, she will ask him to give her something to restore her energy.[40][41] If Link does not have a Bottle with a Red Potion in it, she will begrudge the fact that he's of no help to her.[42] Link can return to Kotake with news of her sister's whereabouts to obtain a Bottle containing a Red Potion, intended to be given to Koume.[43][44] Upon giving her a Red Potion, Koume will recognize it as Kotake's work and drink it hastily.[45] After drinking the Potion, Koume's energy will return to her and she will offer Link a free ride in the Boat Cruise as thanks for saving her.[46][47]

After clearing the Swamp of its poison, Koume can be spoken to again the Swamp Tourist Center, where she will offer Link a chance to play Koume's Target Shooting.[55] [56] [57]

If Link tries to speak to Koume in the Woods of Mystery as a Deku, Goron, or Zora, Koume will pretend to be dead.[59][60]

At some point, Koume and Kotake are reborn and the two plot to resurrect their master, Ganon.

In the Oracle of Seasons manga by Akira Himekawa, Koume and Kotake ambush Link, Maple and Ricky as they are heading to Northern Peak. The duo do this by tricking Link after disguising Kotake as an elderly woman in need of assistance atop a gorge.[64] Out of kindness, Link resolves to help her reach her destination.[65] As Link grabs her hand, he questions how the old woman was capable of reaching their position unaided.[66] When he is distracted, Kotake drags him down the side of the gorge into a pit infested with Moldorms. Koume and Kotake reveal themselves to Link's group after they have been cornered, criticizing them for being too kind.[67][68] With the help of the recently-awakened Moosh, Link and his friends escape to fight Onox. During the decisive battle with Onox, Koume and Kotake use their magical powers to summon Onox's true form from the Dark Realm.[69]

After their failed plan to destroy Holodrum, Koume and Kotake resume their work by following Link to Labrynna in the Oracle of Ages manga by Akira Himekawa. In "Oracle of Ages: Nayru", she watches over Link's victory in the fighting contest in Lynna City from the Room of Rites, sardonically congratulating him while resolving to defeat him.[70][71] They send Veran to enact their plan of destroying Link, though they warn her that he has the power to repel evil magic.[72][73] Veran initiates this plan by possessing Nayru, the Oracle of Ages, and tricking Queen Ambi into constructing the Black Tower. In doing so, Queen Ambi unwittingly spreads misery among her people, which Koume and Kotake intend to use to ignite the Flame of Sorrow.

Koume and Kotake reappear in "Veran's True Form" after Link and Sir Raven defeat Veran, having traveled to the past to continue their dark designs. In her dying breath, Veran offers her own sorrows to Koume and Kotake.[74] Upon receiving the collective sorrow from Veran, Koume and Kotake appear before Link, who recognizes them from his journey in Holodrum.[75][76] Koume and Kotake reintroduce themselves as Twinrova and explain that the Flames of Destruction and Flames of Sorrow have both been ignited.[77][78] Sacrificing themselves as the final catalyst, they manage to resurrect Ganon. However, Princess Zelda calls to Link from across time to inform him that Ganon's resurrection wasn't totally complete, as Twinrova only managed to return the mindless body, filled with rage.[79]

Koume and her sister, Kotake, appear as stage hazards in the Gerudo Valley stage of Super Smash Bros. for Nintendo 3DS. Koume attacks the left side of the stage with flames.

The names of Koume and her sister, Kotake, are derived from the elderly twin sisters in the Japanese mystery novel 八つ墓村 (The Village of Eight Gravestones).[80][81]