I’ve noticed that a lot of people all over the place seem to naturally assume Majora's Mask came from Termina (in a more crazy theory minded person Stone Tower Temple). Well I’m here to give you the facts on why it doesn’t come from there as well as disproving the facts as to why it comes from Termina. So let's get started.

List of reasons why it could come from Termina 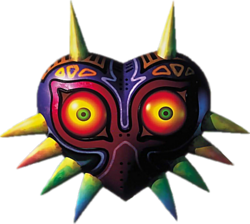 List of reasons why it could come from Hyrule 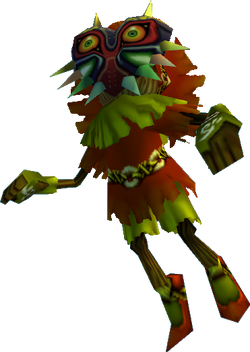 The Skull Kid Wearing the mask went to Termina: As we can see from the story Anju's Grandmother tells you of the Four Giants, Tatl's flash back and Konume's comment on him, the skull kid originally came from Termina. Meaning he was able to find Hyrule. As we see in the same Tatl flash back Hyrule was where he stole it. When Link chases him the Skull Kid apparently makes the conscious decision to return to Termina. We can also see at this point the Skull Kid seems to have some degree of control over himself.

The King of Ikana blamed his ancient curse on the "Masked one": This is the main quote that makes people believe it came from Termina (and crazy people, Stone Tower Temple). It is also easily explained. Igos and Aveil are the only ones that make reference to a masked one and Aveil's comment (if what the masked one says is true and we can become rich by getting to that temple then we can live the good life {something along those lines}) seems to be the skull kid but only by the time frame on which it happens. However the comment Igos makes seems to refer to an older being. Nobody except the undead living in Ikana refer to it as such and Ikana Castle is called the Ancient Castle of Ikana meaning it is old and visibly in semi ruins meaning the undead of Ikana have been cursed for a very long time (this and what they suggest as much). An alternate identity to the masked one has been put forward by myself. I believe it could be the Garo Master who wears a golden mask and lives in Stone Tower Temple could be this "masked one" (living there could mean he opened the doors causing the curse). All in all the one who caused the curse doesn’t have to be Majora's Mask

Images of the mask can be seen in Termina: I believe this one is concept art. The picture of Majora's Mask only (and I mean only) appears on Blocks, Switches and Crystal Switchs outside of Ikana. Now for some case and point this Mask Symbol was used to replace the Gerudo Symbol from Ocarina of Time which appeared on every switch and block in the game. I highly doubt the Gerudo built all the Temples in Ocarina of Time's Hyrule as well as The Deku Tree, Dodongo's Cavern and Jabu Jabu. Therefore I conclude it is merely art and not meant to be taken literally as connected to the being. Why did they change it in Majora's Mask? Because of the Controversy the original caused and they needed a replacement so they just picked out one of their new ones. As for stone tower temple. Yes the image appears a bit in Stone Tower Temple but another image also appears there even more. The Triforce. We know for fact that the Triforce didn’t come from Termina which means the symbol appearing there is not proof that Majora's Mask did either. It appears the original creators of Stone Tower Temple were stealing designs and entities from other worlds during the making of the building (much like the catholic church).

It was stolen from the Happy Mask Salesman who comes from Hyrule: The Happy Mask Salesman directly states he found the mask and took it from its prison. Some people say that he discovered Termina (even crazier people say because he's a god) and came back to Hyrule with the mask until it was stolen from him. I counter this by saying that Happy Mask Sales Man didn’t know about Termina or at least didn’t know much about it because he had to stalk Link to find it ("Now don't think me rude, but I have been following you") 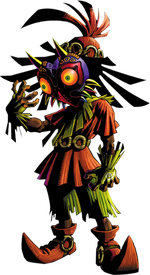 It was said to be used by an ancient tribe for hexing rituals: People assume this was the Twili so on this point ill disprove that by saying the Twili where supposed to have disappeared in the civil war ten years prior to Ocarina of Time. The Happy Mask Salesman states that they are a tribe from legend which means they disappeared a long time ago unless things become legend in Hyrule after only ten or so years. Therefore this point cannot be used to support either origins.

We now have only two points that can tell us what realm the mask came from both of which support it originating in Hyrule. Therefore I now conclude with my expert opinion that the mask either came from Hyrule or an unknown dimension. It is possible it came from Termina but there is no solid proof in game or otherwise. The most in game proof points towards Hyrule

A section for user responses reading this. More evidence supporting the mask coming from Hyrule or Termina is also welcome.

This is very good, however im not completely won over, For one the Happy mask salesman of terminia is the pararrell universe equivilent of the hyrule one (In my opinion), also, the mask is garo-colours (Purple and orange). I wouldent be suprised however if skull kid found the mask in hyrule, mabye this "dark realm" that happy mentions is infact Hyrule User:Leekduck|Leekduck (vote for me, and you will get a hot dog) (User talk:Leekduck|talk) 21:49, December 9, 2009 (UTC)

The Happy Mask Salesman states he owns the Happy Mask Shop which we know exsists in Hyrule. true there could be a termina equilvent of it but it doesnt appear in game if there is. Plus he is seen traveling through Hyrule until he is attacked and doesnt appear to know how to get to Termina until he follows Link. Oni Dark Link 16:30, December 10, 2009 (UTC)

Well, yeah. Kind of obvious if you think about it and pay attention. Almost no question about it being from Hyrule. Xykeb Yvolix Zraliv 21:06, December 19, 2009 (UTC)

don't got me conviced,I will write down my theorys and which one of your theorys that they cortradicts, 1.It could be seen that the gruedo symbol is Din's symbol and that's why it everywhere, and the Ikana could have ruled all of termina once so thats why majoras mask is on everything because it's in their lore 2, 2.there is no proof that the happy mask salesman was attacked in hyrule it could have been in the southern swamp or even termina field, 3 and 4, 3.when the happy mask salesman disappered in OoT he could have gone to termina to get the mask when he was mugged by the skull kid, 3, 4. there's more info that points to the mask coming from the stone tower than hyrule, all, 5. your last one does not support your theory,6, 7. the mask seems to possess him between the time that he mugs link and when link gets to termina so its plusible that the mask was streering him to termina I not saying that he didn't know about termina but would you rather run though a portal, long coridors and town where you've caused michef or the lost woods which as a skull kid you would know well,1,--: Majora's Warth's Reincarnation [ 17:09, August 4, 2010 (UTC)

I'm not convinced for a couple of reasons. The same argument you used to disprove a Terminian origin (specifically, it didn't have to come from there just because that's where the Skull Kid went--he found it in Hyrule and took it back to Termina) can be used to disprove a Hyrulean origin as well (the Happy Mask Salesman may have found the mask in Termina and brought it with him to Hyrule). Also, I see no reason to think that he didn't know how to get to Termina before he stalked Link. Maybe he just thought that Link would be able to take down the Skull Kid, so he followed him hoping to recruit him. Jedimasterlink (talk) 08:13, January 19, 2011 (UTC)

I don't see any real evidence here that the mask came from Hyrule, or that it couldn't have come from Termina. Your conclusion section implies Hyrule is more likely though, which I disagree with. Where Majora's Mask was seen first doesn't matter as it has been taken from wherever it originated. The Happy Mask salesman's original location is irrelevant as he could have gone between the two lands at any point (this guy just fades away in the ending, for all we know he may not even have to walk to get between worlds), and he may not even be the salesman from Hyrule, but perhaps his Terminan equivalent. For the record, the mask's image also appears on the boss warps, but that's not really evidence of anything as the boss warps could easily have been created along with the curses on the boss remains. Also, the presence of Majora's Mask images in the Twinmold "pocket dimension" can lead to the idea that it is the place the mask was sealed away in (it being a strangely separate realm requiring the inversion of the temple to access). I'm not necessarily 100% behind that theory myself, but it's an interesting parallel none the less, and about as conclusive as anything else. It seems to me that where Majora's Mask did or didn't come from, much like what the thing inside it actually is, is simply not known, and never will be with any level of certainty. But just think how much more attention it has captured by remaining a mystery.--FierceDeku 10:27, January 19, 2011 (UTC)

Ahem, the mask would obviously come from Termina because why would there be a statue of it in Stone Tower Temple. --Wolf the troll kirby

Retrieved from "https://zelda.fandom.com/wiki/User:Oni_Dark_Link/Why_Majora%27s_Mask_doesnt_originate_in_Termina?oldid=464406"
Community content is available under CC-BY-SA unless otherwise noted.