Hi, welcome to my page. Feel free to leave a comment on my Talk Page or take a look in my Sandbox or on my contributions, my personal prides are to be seen below ↓. 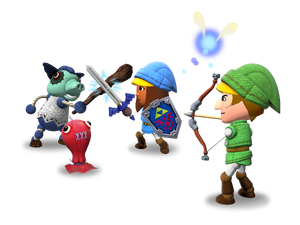 Much of the fun I had with my favorite (Skyward Sword), I had even before its release. Not due to that I got my copy 2 days before it was even released, but trying to figure out what it was all like. An attitude like that raises expectations easily, but Skyward Sword really lived up to those expectations of mine, by far. So I really am looking forward to what's next. That "next thing" is currently Battle Quest, the zelda-part of Nintendo Land. How will the swordsman controlling be done without a nun chuck? What does the AWESOME Epic Yarn-ish art style add to the overall gaming experience?

All these are questions I would like to have an answer to as quickly as possible (Nintendo must've done something right this E3?), I guess I'm sure I'll get answers to that as soon as I get the game to play it my self. One thing I'm really into is the Miiverse integration, but that again raises even more questions. These questions aren't necessarily about Battle Quest itself, but more of Nintendo Land in general, but maybe not even that; some are about the Miiverse in general. But back to what Nintendo's solution for online gaming can do for Battle Quest. Will Battle Quest be playable only local, or will members of this wiki hypothetically be playing Battle Quest together from wherever on the globe before the end of this year? So much we have yet to know, so much we have yet to see...

The kind of articles I wanna see on this wiki

I like it when I get that pleasent surprise that an article is that well written that you can't possibly think of anything to add to the article but references, categories and translations. Especially when you didn't have that high expectations for the subject. Such as for example the Shipyard Worker. There is close to nothing to add to it. Nada! I "raised" that article "since it was only" a redirect, so I didn't get that a shock, kind of. But an article that really gave me that shock, was the Tears of Light, the ones you get from slaying Shadow Insects as Wolf Link in Twilight Princess. Neither of those two are really lengthy, but lengthier than what one (read: I) had expected.

I like Dungeons that has that authentic feel, like if they weren't meant to be dungeons created for the sake of level design and gameplay mechanics. It is dungeons as so that makes my experiences of playing Zelda better. Most of the dungeons in Ocarina of Time are titled temples, and this goes especially for the Spirit Temple: Who put a large amount of death traps in a place where they are supposed to be praying to, praising and worshiping whoever or whatever the temple may have been dedicated to???!!! I find that very confusing. Two of my favorite dungeons are the Snowpeak Ruins, a frozen abandoned mansion in Twilight Princess that really feels authentic, and the Sandship in Skyward Sword which may have had a predictable boss, but really had that authentic and believable feel that made me stop playing through and just enjoy the level design combined with the game's beautiful art style not to mention its incredible one-to-one motion controls.

Contributions that makes me proud