Hi! Im molgera the octo. i chose the name because it has my two favorite enemies in the whole zelda series

I added that the miniboss red wizrobe can be killed instantly when picked up and thrown while frozen. that's all so far

this is all fantasy, not real. i shouldn't have to tell you this. 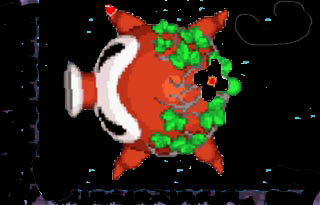 How could a molgera/octo be born you ask? I shall tell you, in the first few years after the great War of hyrule, a molgera and an octo crossbred(big surprise, eh?) and laid a massive house sized egg on the sandy beaches of an undiscovered continent( i was conceived on cliff plateau island). one day when I was swiming, a dieing moon fell into the ocean, causeing great havoc. I swam to the moon and devoured it, giving me great power. But with great power comes great response ability, so I shrank to the size of a normal octo and made a well hidden home in lake Hylia. I call my home the temple of droplets. One day a bitter cold spell froze me and my home. 10000 years past by and a strange creature called vaati appeared and placed a blue turtle(water element)in front of me and released millions of evil creatures into my home. 5 days later i watched a young green boy solve my large (small) temple. After 4 hours of watching he released light on me. oh, the beautiful warmth; and my gnawing hunger I ran forward and ate the little blue turtle. then i ran into my room, the small boy came in to. I just HAD to reward him! I came forward to give him a highly nutritious rock( I couldn't remember what gorons looked like), and he hit it back into my face. How rude! We battled for awhile and he destroyed me. Again, how rude! so I decided to battle all of his desendents, like the one in that massive disgusting fish, but instead I saw a ugly zora, so I gave it to my good friend barinade. I came down and battled the boy again and he won again! 12000 years passed and Hyrule was covered in twilight. I watched the young man I now know of as link defeat gannon. now i know his sent and i will chase him to the ends of the world! Umm, well I would, but he didnt live that long... and 400 years later, a massive flood happened, so I evolved to survive the water. I ate pirates, gyorgs, other octos, a great fairy, bokoboblins, and subs. Then a new link came and beat the fairy out of me. I need to get in shape! Now I will kill someone! I found a nice little place called the Temple of winds and took it over and got a brand new cyclone! Until he came again, and threw bombs into my cyclone and beat me again again AGAIN! sheesh. Years later, I now live on eastern hyrule, the new country, in the valley of death and link killed his doppelganger darklink. I now live in The great palace and I made it evan worse. What the? I see Link in a train! train souldent be here! oh well. Ill eat him later.

This is my pet:

Things I want to accomplish or find out

Theories I belive in

i am almost 6 feet tall

Retrieved from "https://zelda.fandom.com/wiki/User:Molgera_the_octo?oldid=414003"
Community content is available under CC-BY-SA unless otherwise noted.