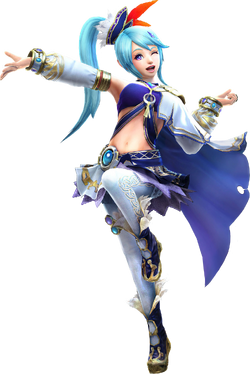 Cia (evil half)
Lana (pronounced /'l??n??/ LAH-nah)[1] is a playable Warrior in Hyrule Warriors. She is a sorceress with light-blue hair armed with a book of magic that she uses to cast barriers to disperse enemies. She is described as a very energetic girl with a vast knowledge of magic and monsters.

Lana is primarily a spell-caster in battle. She is athletic, capable of bounding and leaping across the battlefield with ease. When using her Tome's barriers she can jump off them in acrobatic feats, traversing battlefields swiftly.

Her starting weapon type is the Tome, a book of magic she carries to attack and to cast spells. When used normally, Lana is able to manipulate the pages of her book to strike her enemies. Its most prominent skill is the conjuration of barriers which can take a variety of shapes. Lana can create walls that surround enemies, shove them away, or even create a cube-shaped barrier that she can roll to plow through hordes. These barriers shatter once they sustain sufficient damage, although Lana can also shatter them at will. Doing so causes damage to many enemies, though Lana can also be harmed. The weapon is of the Lightning element.

Her second weapon type is the Spear. It is primarily a tool for manipulating trees and plant life, allowing Lana to use water and ice spells. She can also conjure Deku Trees and sprouts with it. Alternatively, it can change form into a Deku Leaf, an over sized Slingshot, and the Deku Shield. The Spear is of the Water element.

Her third weapon type is the Summoning Gate. Similar to the Spear, Lana uses it to summon creatures to fight for her. Her familiars are mostly enemies such as Dodongo, Gohma, Manhandla, and even Argorok. Using her Charge initially will summon a miniature boss monster and be stocked below her life bar. Should Lana use a combo that summons that particular enemy, the finisher will be powered up, such as when she summons Argorok and instead of it merely breathing fire, Lana will proceed to ride it. Overall, the Summoning Gate is a unique weapon with great crowd control, but due its combos' unwieldy nature and overall low damage it can be difficult to utilize in a situation against a Captain enemy or a boss. Lana will dance and hum songs while using the Summoning Gate. It is of the Fire element.

Lana was originally part of one being, Cia,[2] a powerful sorceress who was tasked with maintaining the balance of the Triforce.[3] Cia, able to observe distant eras and those who lived in them with her magic,[4] became infatuated with Link[5] and in turn jealous of Princess Zelda.[6] Her preoccupied thoughts left her vulnerable as she was approached by a spiritual fragment of darkness, belonging to Ganondorf, who saw an opportunity to use her.[7] Due to this, Cia became corrupted as the light from her soul was pushed away, which was physically embodied as the sorceress Lana.[8][9] Like Cia, she too also harbored affections for Link. However, the young sorceress was able to contain her feelings for the hero and accepted that two of them were not meant to be.[10]

While Cia became the corrupted, wicked side of her former self, Lana became the virtuous side. Cia had opened the Gate of Souls to wage war over Hyrule,[11] compelled by the darkness to acquire the full Triforce and to revive Ganondorf.[12] Lana had retreated to the forests of Faron Woods, becoming the leader of a band of resistance fighters and determined to end Cia's machinations.

The Hyrulean Forces later meet Lana at the Faron Woods after hearing rumors of a resistance in the forest led by a young woman.[13] They arrive hoping the she is Princess Zelda,[14] who had gonemissing shortly after the wars began. Lana becomes of interest when she tells Impa that she is a sorcerer from the same clan as Cia,[15] dissembling her identity. Lana says she'll only tell more if the Hyrulean Forces help her to defend the forest.[16] Link, Impa and Sheik help Lana to defend the forest from the monster troops and defeat the Gohma sent by Wizzro. With the forest base protected, Lana travels with the Hyrulean Forces to the Valley of Seers where Cia awaits.[17]

After the battle at the Valley of Seers, Link and Sheik confront Cia, but she is able to steal their Triforce of Courage and Triforce of Wisdom. With the full Triforce now in her possession, Cia then uses the Gate of Souls to summon entire worlds from other ages and merges them into present-day Hyrule. To escape the effects of this, Lana flees with the group and has them stand around her, casting a protective barrier around them as they watch the fusion take place. Three of Ganondorf's scattered fragments are freed in this process and return to Cia, leaving only the fragment sealed by the Master Sword, with three Gates of Souls also opening in the new worlds.[18] The Hyrulean Forces resolve to close these gates and split up, with Lana heading into the Twilight Era portal.

Stepping into the Twilight Field, Lana comes upon a small village and rescues Agitha from a group of monsters, who in turn aids the sorceress in her mission by using a Goddess Butterfly to guide both of them through the Twilight.[19] The duo soon encounter Midna and are mistaken by the Twilight Princess as Cia's allies, ensuing in battle before Midna realizes her error and joins the Hyrule Forces' quest to stop Cia.[20][21] Following the lead of the Goddess Butterfly, the group arrive to the Palace of Twilight and defeat Zant, with Lana using her powers to close the Gate of Souls.[22] Cia arrives to the scene soon after and is attacked by Midna for mocking her new appearance, knocking off her mask and revealing her face to be identical to Lana's.[23] As Cia leaves, Lana is forced to explain her story to Midna.

The group later reunites after closing the three Gates, and Lana is forced to explain to everyone else that Cia and her are actually the same person.[24] Upon arriving to the Temple of the Sacred Sword, Link and Zelda realize that their Triforce pieces have returned, prompting Lana to suggest to counterattack now that Cia's power has diminished.[25] To accomplish this, the Hyrulean Forces aid Link in retrieving the Master Sword and use it to fight against the evil sorceress at the Temple of Souls. Cia and her forces are overcome despite the sorceress's immense efforts to stop the heroes, pushing herself to her limits to summon large hordes of monsters.[26][27] Concerned for her other half's well-being, Lana pleads Cia to stop using magic that her spirit cannot contain, but the evil sorceress berates her and escapes to the Valley of Seers.[28][29][30] When the allies arrive to the valley, Lana is pained to watch Cia continuing to pull from her life force to summon hordes of monsters and asks her once again to stop, but her counterpart refuses to listen and is defeated by Link.[31] Rushing to her side, Lana tries to comfort Cia, who asks her how she is able to contain her feelings despite knowing that Link will never be by her side.[32] Lana explains that she accepts the fact that Zelda and the young hero are destined to always save Hyrule together instead of being with her, and at hearing this, Cia commends her for her strength and fades away, leaving Lana with the Triforce of Power.[33][10][34] Lana then sends the new Allies back to their respective eras and, with the combined power of Link's, Zelda's and her Triforce pieces, she returns Hyrule back to its original state. Zelda asks Lana if they will ever see her again, but she sadly bids them good-bye and leaves to close the Valley of Seers' Gate of Souls.

The returned peace is short-lived as Ganondorf's final fragment is freed by the removal of the Master Sword. Now revived, he plots to build an army to take the Triforce. He summons Ghirahim and Zant, built his stronghold at Gerudo Desert, and quickly advances to take Lana's Triforce piece.[35] Lana and her forces are overcome even though Impa and her army rush to her aid to defeat Ganondorf's forces, which leads Lana to split herself into two in a last attempt to flee.[36][37][38] However, Ganondorf beats both of her doubles and seizes the Triforce of Power from her possession, marching to Hyrule Field where he defeats Link and Zelda and acquires the full Triforce.

The Hyrulean Forces regroup and plan to defeat Ganondorf by first taking over his stronghold at Gerudo Desert. Lana is cornered by enemy troops, and in an act of desperation summons her Allies back from their eras. With the stronghold conquered, the Hyrulean Forces march back to Ganon's Tower to defeat Ganondorf. Lana aids Link in defeating the King of Evil after he transforms into Ganon by giving part of her life force to empower the Light Arrows.[39] Following Ganon's defeat, the Triforce's pieces are returned to Link, Zelda, and Lana. Using their combined pieces they send Ganon away, bringing peace back to Hyrule. Lana tells Link to return the Master Sword to its temple,[40] and insists that only Link and Zelda should do it together, bidding Link good-bye a final time.[33]