These are my proposed featured article "tidbits" for display on the main page.

The Seven Sages are a group of characters from The Legend of Zelda: Ocarina of Time. After withdrawing the Master Sword from the Pedestal of Time in the Temple of Time, Link was trapped inside the temple for seven years, until he was mature enough to become a true hero. When he was released from his detainment, a sage named Rauru spoke to Link in the Chamber of Sages about the evils Ganondorf had inflicted on Hyrule in his absence. Link then set out to find the five unawakened sages, Saria, Darunia, Princess Ruto, Impa, and Nabooru to fulfill their destinies as sages. After awakening them all, they combined their power to grant Link access to Ganon's Castle, and seal the evil king inside the Sacred Realm, which provided the basis for two widely-accepted chronologic timelines. (more...) 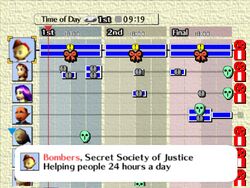 After exiting the Clock Tower on the dawn of the First Day, Link can participate in a variety of side-quests to help characters, obtain masks, and gather Pieces of Heart. If Link pops the large, purple Majora's Mask-themed balloon in North Clock Town, the leader of the Bombers Secret Society of Justice, Jim, will be impressed by Link's obvious talent. He will allow him to participate in a hide-and-seek game to learn the password to the Bombers' Hideout. After Link returns to his normal form, he can speak to any member of the Bombers' to obtain the Bombers' Notebook, which allows him to record the events and daily lives of the citizens of Clock Town. (more...)

) is a leading member of Hyrule's Royal Family and plays an integral role in the history of Hyrule. Though she is the titular character, the player takes control of the protagonist, Link. Usually, Zelda is in some way kidnapped or imprisoned by Ganondorf, creating the usual "damsel in distress" plotline the series is known for. In some games she appears as a sages or prophet. To date, she has never been a playable character in the main series, though she appears alongside her alter-ego Sheik as a fighter character in the Super Smash Bros. series.

Shigeru Miyamoto has stated that her name was inspired by Zelda Fitzgerald. It is also interesting to note that Zelda's name can be associated with delta, shaped triangularly like the Triforce. The Dhimotiki (modern Greek) word for δελτα (delta) is dhelda (pronounced IPA /ðel.da/), which is typically transliterated to katakana as zeruda.

The first stone, the Kokiri's Emerald, is held by the Great Deku Tree and given to Link after he destroys the monsters infesting the inside of the Great Deku Tree. The second stone in the Goron's Ruby, which is in the possession of the Gorons of Goron City hidden inside Death Mountain. When Link clears the way to Dodongo's Cavern and destroys the enemies inside, the Gorons are able to eat again and Link is granted the ruby. The third and final stone is the

Death Mountain (Desu-Maunten, Death Mountain?) is a recurring location in the Legend of Zelda series. A large volcanic mountain, its rocky exterior is often traversed by Link in his adventures. Death Mountain is home to the race of the rock-eating Gorons, proud humanoid creatures.

Retrieved from "https://zelda.fandom.com/wiki/User:Baltro/Featured_Articles?oldid=514702"
Community content is available under CC-BY-SA unless otherwise noted.