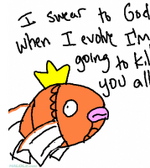 Hello! Welcome to my userpage, where I will stop by to expand upon between edits and writing fanfiction. Vote on my polls (however lame) and sign my page afterward.

may 15
a hospital somewhere

I swallowed an immortality pill the other day, so...
WHAT DID I JUST SAY ABOUT DYING!?!

Sitting in front of the TV, which is on OoT, while I yell, "WHERE ARE YOU GOLDEN SKULLTULA!?! I WANT YOUR TOKEN NOW!!!!"

procrastination, avoiding homework, talking about zelda at lunch when none of her friends care (which reminds her...Why is she still friends with them?)

The Awesomest of All Awesome Sheikahs

when I die, which will be never. (see death date)

Useless trivia about me

The Ones I Believe

The Forbidden Woods is Kokiri Forest. We all saw the stumps that looked like the Kokiris' houses inside the Forbidden Forest. Koroks also used to be Kokiri, and one of them mentions that's where they used to live.

Windfall is Karkiriko Village, Dragon Roost Island is Death Mountain and Forest Haven is the Lost woods. The location on the Ocarina of Time map is pretty close to the location of the Great Sea map, the music is similar, and they both have the windmill. Dragon roost in Dragon Roost Cavern there were those goron statue things and a volcano, and forest haven if Forbidden woods is Kokiri forest then Forest Haven has to be the Lost woods.

The split timeline Eiji Aonuma actually said this during the interview, and as he is the series' director, I think we can safely say that this theory is true.

The Rito evolved from the Zora No, I don't see how a fish becomes a bird either, but we all saw the Zora symbol on Medli's apron. And don't forget, Wind Waker was set hundreds of years after Ocarina of Time, so it COULD happen.

The ones I don't believe

Multiple Ganon Theory I admit that I haven't played most of the Zelda games, but in Wind Waker Ganondorf actually says that he was the same Ganon from OoT (well not directly, but he DID talk about Gerudo Desert before the final battle) and in Twilight Princess he talks about the sages trying to murder him. (either him or the sages) In Twilight Princess there were 7 sages, one of them being sage of Water, and in OoT there were also 7 sages, one of them being Sage of Water. See the pattern? So the sages could be the same ones. I do feel slightly sorry for Princess Ruto, creepy as she was...

2) Princess Zelda says that her grandmother (who must be Tetra) gave her the spirit flute, and Anjean gave the flute to Zelda's Grandmother, who again must have been Tetra. ARE YOU TRYING TO TELL ME THAT ANJEAN GAVE THE SPIRIT FLUTE TO HERSELF?!? HOW THE **** ARE YOU SUPPOSED TO GIVE SOMETHING TO YOURSELF?!?

Zant is an Oocca Who was the idiot who came up with this, I'd like to know. They deserve to be throttled to death.

Kafei is Link's Terminan Counterpart okay so I was just on Fierce Deku's page, and then I saw this. It just...it just doesn't make sense...

Update when I hear more theories.

Zelda-related things I don't get

things that make me crack up

I wish this was real. I would so buy Left 4 Dad. It isn't particularly funny but I still crack up every time I see the picture.

Halo Beach sounds pretty good to me too.

http://www.halolz.com/index.php?s=castle+town+pottery So true for me cuz I have to break every pot I see and cut all the grass (which made me fail that one room in the Temple of time{TP} where you had to put the pots on the switch, but since I broke them, I was yelling, "WHERE THE **** ARE YOU STUPID STATUETTES" until I went out and came back in, at which point my brother came, showed me how to do it, and laughed at me afterwards.)

You know you've played too much Zelda when...

If anyone has any suggestions, tell me and I may add it to my list.

Retrieved from "https://zelda.fandom.com/wiki/User:AwesomeSheikah?oldid=441802"
Community content is available under CC-BY-SA unless otherwise noted.