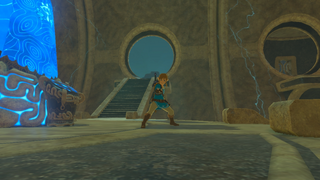 Urbosa's Fury,[1] also known as the Power of Urbosa,[2] and Urbosa's Power,[3] is a Key Item and an ability in Breath of the Wild.

Link receives Urbosa's Fury from the spirit of the Gerudo Champion Urbosa after defeating Thunderblight Ganon and calming the Divine Beast Vah Naboris.[4] Urbosa's Fury allows Link to send off a massive radius of electrical damage to all enemies in the vicinity. The area affected by the attack is depicted by a large green hemisphere of light. It is performed by charging a Spin Attack with any weapon for a certain amount of time and releasing it. With most weapons, Urbosa's Fury will be ready when the charging sound of the Spin Attack is heard twice. No matter what weapon Link is using, it will take about two seconds to charge. This powerful move can defeat many enemies in one strike and will leave them stunned with electricity should they survive. Creatures are unaffected by Urbosa's Fury.

Urbosa's Fury can be used three times before recharging and cannot be used again for twelve real-time minutes. While in Hyrule Castle, it instead takes four minutes to recharge. After being upgraded to Urbosa's Fury +, its recharge time is reduced to four minutes and its recharge time inside Hyrule Castle is reduced to one minute and twenty seconds. Like all Champion blessings in Breath of the Wild, it can be disabled from the Key Items inventory.

Urbosa performs this ability in Link's sixth Recovered Memory, "Urbosa's Hand", when Princess Zelda is asleep in her arms. She snaps her fingers to create lightning to wake the sleeping Zelda. She also performs it in the fourth Recovered Memory of The Champions' Ballad DLC Pack, Champion Urbosa's Song, when fighting a group of Yiga Footsoldiers.