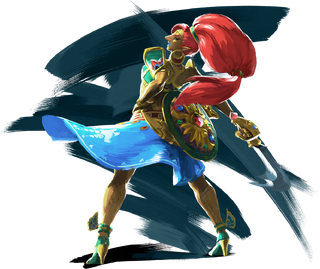 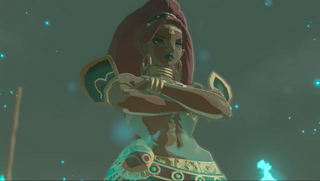 Urbosa is a recurring character in The Legend of Zelda series.[9][name reference needed]

Urbosa is a Gerudo Champion who pilots the Divine Beast Vah Naboris.[10] She is capable of manipulating lightning using her technique, Urbosa's Fury. Urbosa battled with the Scimitar of the Seven and the Daybreaker shield.[11] It is said that Urbosa's movements resembled a beautiful dance when using the Scimitar of the Seven.[12] Urbosa cares for Zelda like a sister with a strong core.[13] According to the Gerudo child, Pearle, Urbosa once saved Gerudo Town from an evil ghost.[14]

In The Champions' Ballad DLC Recovered Memory, Champion Urbosa's Song, Princess Zelda arrives to Gerudo Town seeking Urbosa, the current Gerudo chieftain, for aid against stopping Calamity Ganon. Urbosa accepts Zelda's proposition without hesitation, as the Yiga Clan are planning to resurrect Calamity Ganon and steal the Gerudo peoples' treasured heirloom.[15] Urbosa gives Zelda her word that she will not rest until the Calamity falls.[16] Princess Zelda thanks the Gerudo chief on behalf of Hyrule and its king.[17] Later, Urbosa and Zelda laugh while they walk outside Gerudo Town's walls. Zelda remarks that she has never seen Urbosa so serious.[18] Urbosa cannot say the same, since ten years ago her "little bird" rarely smiled, referring to Zelda.[19] The Princess feels like Urbosa has called her "little bird" before and asks where she got the name from.[20] Urbosa stands still and orders two men who had passed behind them to halt and face her.[21] She continues and calls the men traitors and that unlike them she prefers to face her enemies head on.[22] After the two hesitantly look at each other, Urbosa draws her Scimitar of the Seven and spins around, telling them to do their worst.[23] The two men, who are actually Yiga Footsoldiers, attack the Gerudo. Urbosa duels one of them before knocking the Yiga down using the Perfect Guard and hitting him in the stomach with her Scimitar hilt. She places the Daybreaker Shield on her back before using Urbosa's Fury to electrocute the second Yiga as he jumps in attempt to attack her from behind. Urbosa tells the Yiga that out of respect for the Princess, they may keep their lives and orders them to go.[24] When the Yiga leave, Urbosa sheathes her Scimitar and brings up Zelda's question about why she calls her "little bird."[25] Urbosa says that when the Princess was a small child, her dear friend called her that,[26] with Zelda realizing that Urbosa is referring to her mother.[27] Urbosa says that it was ten long years ago when the Princess's mother had left the world, yet her "little bird" still spread her wings and became the beacon of light Hyrule needed.[28] Urbosa says that sometimes she forgets herself and gets lost in the past.[29]

During Link's first Recovered Memory, "Subdued Ceremony", Urbosa is seen with the other Champions as Zelda appoints Link as her knight. After the Rito Champion Revali complains about the ceremony and Link,[30][31] Urbosa tells him to give it a rest and that Link is a living reminder to Zelda of her failures.[32]

Prior to the events of Link's sixth Recovered Memory, "Urbosa's Hand", Link is called to the Gerudo Desert by Urbosa.[33] During the Memory, Link arrives to the Divine Beast Vah Naboris to find Princess Zelda sleeping in Urbosa's arms. Urbosa remarks that Link got there quickly and that she should have expected such from Zelda's own appointed knight.[34][35] Urbosa then explains that Zelda is exhausted from being out on a survey all day.[36] She then asks Link if he and Zelda have been getting along and quickly understands that they have not due to Link's response of silence.[37][38] Urbosa does not blame Link for their poor relationship and explains that Zelda feels like a failure in her destiny when seeing that Link has succeeded in his.[39][40][41] She goes on to explain that Zelda has put more than enough time and dedication to accessing her sealing power, even passing out in freezing waters during one attempt.[42][43][44] Urbosa sympathizes with Zelda, saying that she would be doing the same thing and that Zelda is quite special.[45][46] Telling Link to protect Zelda with his life, Urbosa turns to smile at Link and tells him that his role as her knight is quite an honor.[47] With the night getting cold, Urbosa feels that it is time to take Zelda inside, but suddenly a better idea strikes her.[48] Urbosa snaps her fingers to perform Urbosa's Fury, which causes lightning to strike into the Gerudo Desert and startles Zelda awake.[49] Zelda turns to notice Link and questions what he is doing there.[50] Urbosa begins to laugh at Zelda's confusion as she asks what is funny.[51]

During Link's 15th Recovered Memory, "Return of Calamity Ganon", Urbosa and the other Champions wait near Mount Lanayru for Zelda to return from her journey to the Spring of Wisdom. After Zelda returns to report that she felt no power in the Spring, Urbosa suggests that they move on and that feeling sorry will not help.[52][53] She also assures the Princess that the Spring of Wisdom was not her last shot and that they just need to find the thing that sparks her sealing power.[54][55] Immediately after, Urbosa is proven wrong as Calamity Ganon begins to wake from its slumber. Urbosa tells Zelda that they need to get her somewhere safe before Zelda refuses,[56] pleading that there must be something she can do to help.[57]

Urbosa, as one of the four Champions who pilot the Divine Beasts, was a part of the plan to defeat Calamity Ganon 100 years prior to the events of Breath of the Wild. Urbosa and the other Champions met their demise to Calamity Ganon's four incarnations of Malice. Urbosa was defeated by Thunderblight Ganon.[58] After her death, Urbosa lives on in the afterlife as a spirit and is trapped within Naboris. In Breath of the Wild, Link enters the Divine Beast Vah Naboris, defeats Thunderblight Ganon and frees Urbosa's spirit.[59] Urbosa tells Link that she has waited for him to rush Hyrule Castle so that she can incinerate Ganon into a pile of ash.[60] She rewards Link with Urbosa's Fury to aid him in his quest to defeat Calamity Ganon.[1] Urbosa understands how Link and Princess Zelda have suffered regarding the Champions' fates.[61] Urbosa accepts that things had to happen this way and no one need carry blame.[62] She asks Link to let Zelda know this and that she could not be more proud of her.[63] Urbosa concludes by telling Link to take care of the Princess and Hyrule.[64] When the Divine Beast Vah Naboris aims its beam at Calamity Ganon, Urbosa remarks how Naboris, who was named after the Gerudo sage Nabooru, is a legend just like its namesake.[65] Urbosa then says that Ganon once took the form of a Gerudo and likes that she can take her mission more personally.[66] She says once a lock is established on Ganon, it will be up to Link to occupy it until she and the Divine Beast unleash their strike.[67] After Link defeats Calamity Ganon, Urbosa's spirit is seen overlooking Hyrule atop Hyrule Castle with the spirits of the other Champions and King Rhoam, silently bidding Link and Zelda farewell before vanishing with them into the afterlife.

She is survived by her descendant Riju .

After Kass plays Link Ex Champion Urbosa's Song, Urbosa speaks to him from within Vah Naboris. She says Link is an impressive man and allows him to use Urbosa's Fury more often.[68] The Gerudo Champion finishes by saying Link is the pride of Hyrule and that she is leaving the honor of caring for Princess Zelda in his hands.[69] Link is then given Urbosa's Fury +.[70]

In Super Smash Bros. Ultimate, Urbosa appears as an Spirit with the ability, Electric Attack 🠅, which increases the power of a Fighters' electric attacks.